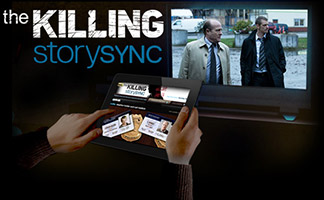 Today, Social TV Summit announced its nominees for the 2nd Annual Social TV Awards, and The Killing was honored with a nod in the Best Drama Social TV category for The Killing Story Sync.

The Social TV Award winners will be announced at a black tie gala on Tues., Jul. 16 at the Bel-Air Country Club in Los Angeles.

Visit TheKIllingStorySync.com on Sunday nights at 9/8c and 9PT throughout Season 3 of The Killing to go deeper into the premiere broadcast of each new episode.