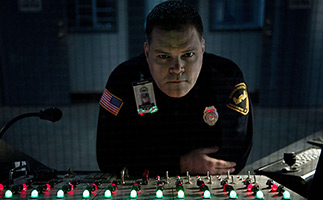 Actor Aaron Douglas, who plays prison guard Evan Henderson on AMC’s The Killing, discusses his character’s backstory and how his background in sports translates to acting.

Q: Did you do any research into the world of prisons in preparation for your role?

A: I watched a documentary about life on death row. One of my best friends from high school is a prison guard and my wife is a probation officer, so I had hands-on accounts from people that are very close to me. My buddy tells me a lot of interesting stories about what goes on in prison — it just makes my head spin about what they deal with on a day-to-day basis.

Q: You’ve previously played a sheriff, an FBI agent, and a police union leader. What makes you so well-suited for law enforcement roles?

A: I’m a chubby middle-aged white guy with short hair. I think that’s it really. I kind of have a look. Right now, I’m not fat enough to be the fat friend, but I’m not thin enough to be the leading man, so I look like a cop. I was going to get fit and try and expand my universe, but then when I got the part as a sheriff on Hemlock Grove, they said, “No, no. You are where we want you to be.” And I said to myself, “Now I have to go to the bar instead — damn it!”

Q: You also played Chief Galen Tyrol on Battlestar Galactica. Is being a chief on a Battlestar at all similar to being a corrections officer on death row?

A: In Battlestar, somebody was always about to die, you just didn’t know. The chief is a little more of a Becker-type character, running around screaming at people, except that he wasn’t a jerk, he was just sort of, “This is what we need to do.” It’s the authority thing, and you have to keep people in line and the train on the tracks and the machine moving forward — otherwise, if it stalls, then everything goes to hell. And that’s certainly the case on death row: You give these guys an inch, and you get in trouble.

Q: How much have you thought about Henderson’s backstory?

A: I kept going back to that idea that he was just a regular guy who was working on a mill, and the economy turned and he lost his job. As an actor we’re unemployed a lot, so I’m familiar with the stress of trying to get a gig, and sometimes you take shows that you don’t really want to do to keep the money coming in. I thought about Henderson, who is trying to provide for his family, applying for jobs everywhere: The local garage, the local home improvement store, and then finally he takes a job for which he has no sociological training. Prisons are always hiring because there is a lot of burnout and they’re being built all the time. And now he’s guarding the worst of the worst, and he doesn’t necessarily understand the manipulation and the head games. So I just tried to keep him as simple and wide-eyed as possible.

Q: As a hockey player, does your background in sports translate to acting at all?

A: I grew up playing hockey and some football, and I always think about the first time you walk into the locker room on a new team. The cliques are looking at you funny, and you make one friend, but then they’re trying to stab you in the back. I was trying to keep all of that in my brain to play Henderson. But I’m not the kind of actor who reads scripts and breaks them down. I go to rehearsal and I give what I get from the other actors. I would be the worst acting coach ever, because I have no idea what I’m doing.

Q: Did the role allow you to gain any insights into the lives of death row inmates?

A: In Canada, we don’t have the death penalty. Even though we’re making believe, Peter [Sarsgaard] is such a phenomenal actor that you really just have this moment of actually believing this guy is going through this. I could not imagine being the guy being walked to the gallows, or even the guy taking somebody by the arm and having to walk him there. No matter how heinous the crime that is committed, it’s still the most intimate and horrifying thing you’re going to do to somebody. The lethal injection is one thing, but it’s the lead up — the weeks and months, and then standing there waiting for it to happen — that is so incredibly profound. I think when people watch the rest of this season, they’re not going to be able to help being challenged, one way or the other, about whether capital punishment is a good thing or a bad thing.