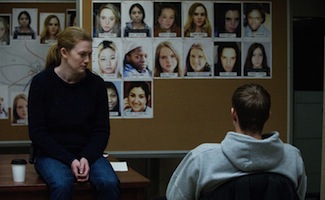 This week, The Globe and Mail interviews Mireille Enos, while Bullet is described by Salon as the show’s breakout character this season. Plus, the actress who plays Lyric talks about the problem of teen prostitution. Read on for more:

• The Globe and Mail profiles Mireille Enos, complimenting her for conveying “horror and sorrow with the tiniest widening of her eyes” in The Killing.

• Liam James (Jack) talks to The Boston Herald about his role in a new film called The Way, Way Back.

• According to Screen Daily, Easy Money 3 (starring Joel Kinnaman) will premiere next month at Sweden’s Way Out West festival.

• Deadline reports that one of Gregg Henry’s post-The Killing projects is a Lifetime movie about Lizzie Borden’s murder trial.

• For recaps and reviews of Season 3, Episode 6, “Eminent Domain,” check out CarterMatt.com, Entertainment Weekly, The Huffington Post, the Los Angeles Times, ScreenCrush, TODAY.com, TVLine, Uinterview and We Got This Covered.