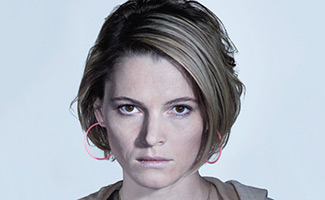 Actor and director Amy Seimetz, who plays Danette Leeds on AMC’s The Killing, talks about her love for difficult women, being a defiant teenager, and what she learned about directing while on set.

Q: You’ve talked about picking parts for the ways they depict women. How does your decision to be on The Killing fit with that desire?

A: I love difficult women! It’s interesting to me to play somebody who’s stereotypically not what you would expect a mom to be. If there’s a deadbeat dad, it’s much more accepted than a deadbeat mom who doesn’t have the instincts to be completely selfless. I find that it’s really interesting to find a character who’s not innately maternal. In a lot of stuff around Hollywood, women are completely maternal or there for support, and there’s not much room to go deeper and understand where all this stuff is coming from.

Q: How deeply did you inhabit Danette’s mind? Did you ever stay in character off set?

A: It’s funny, because a lot of times, acting is really fun and really easy. With acting, sometimes you show up, you do your job, and you leave. You don’t even have to pack up equipment. But with someone like Danette, you’re digging up some dark stuff and it’s hard to shake it when you go home. I’m not an actor that can just turn on the anger and then suddenly be like, “OK, I’m going to go to craft services now.” There were some times where I would get really emotional in scenes, and then I would be talking to someone and it would be really hard for me to not talk in an angry way. Somebody would be like, “Do you want some coffee?” and I’d be like, “I don’t know!” So there was a lot of me learning to find a corner and brood in it.

Q: What did you do to get yourself worked up for those emotional scenes? What choices did you make about the physicality in them?

A: Those scenes were so terrifying to me! When you’re dealing with a character like her who doesn’t trust the police, you realize this is sort of her last resort, the one place she doesn’t really want to go but she has to go there. So when they’re not listening to her, it’s just a snapping point. For me personally, it’s the same relationship I have with going to the hospital for the first time for a family member or someone close. It’s terrifying and awful, and you’re in there and you want to desperately grab the doctor or nurses and be like, “Tell me what is going on!”

VIDEO: Talked About Scene, Episode 305: Danette discovers that her boyfriend has Kallie’s phone.

Q: You recently broke into the world of directing with the indie film Sun Don’t Shine. Did you learn anything about directing while on the set of The Killing?

A: TV moves so fast, and we had a different director for every single episode. I think I learned a lot. Having so many directors, it was a relationship where I was looking at the character throughout the entire trajectory, but when each director came on, it was always an interesting conversation. It made me realize the importance of listening to your actors and learning to where they need to take things so their performance is seamless.

Q: Did you give your own mother as much hell as Kallie gives Danette?

A: If you ask my mom, she would say I was an extremely difficult teenager. But I wasn’t that wild! I was pretty confrontational, and really didn’t like being told no. And when I was told no, I would be like, “Well, I’m going to do it anyway.” I was really defiant in that way, and luckily I didn’t get into too much trouble. I love teenagers because of this sort of angst-y, questioning authority type of fire. They have this interest in wanting to figure out who they are in the world, but they’re so insecure.

Q: Did playing Dannette give you a better sense of empathy for single mothers?

A: My parents divorced when I was a kid. My dad was around, but I grew up in a single parent household. I see my mom as a human being, as someone who’s not really just a mom, but someone who has this world outside of me that’s affecting her outside of whatever problem I’m having.

Read an interview with Peter Sarsgaard, who plays Ray Seward