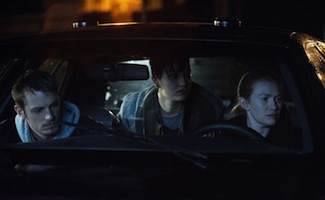 This week, New York chats with Mireille Enos, while BuzzFocus.com is captivated by The Killing. Plus, the Post-Bulletin thinks Enos and Joel Kinnaman’s performances are worthy of Emmys. Read on for more:

• Mireille Enos tells New York that Sarah is “real torn between motherhood and career. She sees in the other derelict mothers her own failure” — and shares her thoughts about a Linden/Holder hook-up.

• BuzzFocus.com lists a dozen reasons why The Killing “has our attention again.”

• A.V. Club talks to Mireille Enos about the many roles she’s played, including Sarah Linden on The Killing where “the world feels larger, the case is larger, and then, you know, it’s also dealing with some important social issues.”

• Amy Seimetz tells PAPER Magazine that initially she was deemed “too cute, too sweet and that they needed somebody a little rougher around the edges” for the role of Danette.

• The Province chats with Mireille Enos, who marvels that she gets to play Sarah, “who is not your typical kind of female lead. She’s a complicated person.”

• Previewing Season 3, Episode 5, “Scared and Running,” Celebuzz says Season 3 has “more than proven why it was brought back to life.”

• Film-News shares a trailer for Easy Money, which stars Joel Kinnaman and opens in the U.K. on July 19.