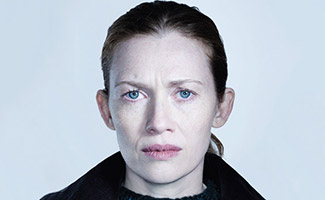 Mireille Enos (Sarah Linden on AMC’s The Killing) discusses the perils of island living, her affinity for the crime genre and her martial arts practice.

Q: Where were you when you first heard The Killing was coming back to AMC?

A: I was in Atlanta shooting a dark and intense action movie. I was super busy, which I think was a great way to find out that it was coming back. My life was already rich, and then I was like, OK, this is the next cool thing to take on. I had always felt disappointed, because this season’s case was laced all the way through the first two seasons, and it always seemed sad to me that we wouldn’t address that. So that was really exciting, the idea of getting to attack that again.

Q: Is there a side of Linden that you didn’t get to show in previous seasons that you look forward to exploring this time?

A: I don’t know if I had any preconceived idea about that. Linden has spent a year trying to get healthy, so she’s in a much more vulnerable place. It’s created an interesting dynamic, with her being much more open and then stepping back into the police force, and that being very complicated for her.

Q: Thus far, Linden has been everything from a struggling parent to a redeemed cop. Do her ups and downs affect you off-camera?

A: No, I don’t think so! Starting this show came exactly at the same time as having my baby, so I’ve gotten really good at compartmentalizing and just being in whatever world I’m in — Sarah’s world or babyland or whatever it is. I often spend time thinking about the script, but it doesn’t change my mood.

Q: Which side of Linden do you most relate to personally?

A: I think probably her stubborn determination to do a really good job at whatever she’s doing.

Q: Do people other people find you two similar at all?

A: My husband came to set a few weeks ago, and he and the director were laughing about how different Sarah is than me. My husband was saying that Sarah’s much more of a linebacker than I am. I’m pretty light on my feet, I’m a pretty happy girl, and I’m goofy. Sarah is incredibly still, has a heavier energy, more rolled shoulders, pigeon toes — she’s tougher than me.

Q: In the Season 3 premiere, Linden’s visit from Holder presages a possible return to detective work. Have you ever left a profession or passion of yours only to return to it after the fact?

A: No. I mean, [acting’s] been kind of constant for me. Once I started working, I’ve been lucky to keep moving forward. And one of my passions is doing Tae Kwan Do, and I had to put that aside right after I had my baby, but not even for that long. My last training session was three days before I delivered.

Q: If you had your way, would you let Linden get pulled back into the life of a detective, or continue living a quiet life working for the transit authority?

A: It’s such a hard question. When someone finds something that they’re really good at, I feel like they should do that thing. The complicated thing for Sarah is that it doesn’t always make her happy, because she’s willing to put the importance of the case above herself. I kind of feel like it’s her calling — instead of shutting out her life in order to be healthy, a better solution would be trying to find ways to be healthy within the context of being a police officer.

Q: Could you ever see yourself living in a quiet, out-of-the-way place like Vashon Island?

A: I’d really like to visit, but I couldn’t live there. I’d go cuckoo.

Q: You also star in two big screen crime dramas, Gangster Squad and Devil’s Knot. Do crime stories choose you, or do you choose them?

A: I do like the genre, and I’m definitely drawn to those scripts, but I feel like they choose me. I keep saying I’m due for a comedy, but that’s just what’s not coming my direction.

Q: You also are in World War Z. How do you think Linden would fare in an apocalypse?

A: She’s a tough girl. She would do well.

Q: Linden prefers big sweaters, jeans and not too much makeup. How does her understated style compare to your own?

A: I definitely am kind of a natural girl. In my own life, I don’t wear lots of makeup and I’m usually in yoga pants. But I’d like to think that I have a little more personal style than Sarah does, although her wardrobe is very practical.