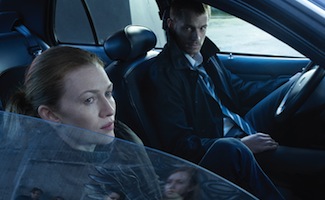 This week, The New York Times discusses The Killing with Peter Sarsgaard, while the New York Post‘s preview bestows four stars on the drama. Plus, USA Today considers The Killing to be a must-see series this summer. Read on for more:

• Peter Sarsgaard, interviewed by The New York Times, says of his character, “There’s a lot more to him than there would be if I were playing the same guy in a movie.”

• The New York Post awards four stars to The Killing, announcing, “Welcome back to The Killing and to Seattle’s filthy underbelly — its lost kids.”

• The Killing is one of USA Today‘s must-see summer series because Mireille Enos and Joel Kinnaman are “two of TV’s best actors playing two of the genre’s more intriguing crime-solvers.”

• The Los Angeles Times, previewing The Killing, observes the drama “earned high praise for its moody tension and the performance of leads Mireille Enos and Joel Kinnaman.”

• The New York Times speaks with many of The Killing‘s main players about the drama’s return, seen as a chance to “offer a different take on a familiar series.”

• Joel Kinnaman tells USA Today why he thinks “[Sarah] Linden and [Stephen] Holder are two sides of the same coin.”

• The Calgary Herald recommends catching The Killing‘s Season 3 Premiere because “no cop drama has been more compelling in recent years.”

• Bloomberg Businessweek declares, “The Killing is getting a second chance and returns a better show.”

• Postmedia News compliments The Killing as “that rare TV drama that feels real.”

• The New York Daily News highlights The Killing‘s return, noting, “Linden and Holder are back and it’s still raining.”

• Max Fowler, a new Season 3 cast member, talks to the Associated Press about The Killing and his character, who’s “very in love with himself.”

• CBS News, RedEye, the St. Louis Post-Dispatch, The Salt Lake Tribune, TODAY.com and TheWrap also make note of The Killing‘s June 2 return. The show is one of the Atlanta Journal Constitution‘s best bets on TV this week.

• Screen Crush checks out a trove of new Season 3 photos, observing, “Seattle looks darker and moodier than ever!”

• CarterMatt spotlights AMC’s video of Joel Kinnaman, Mireille Enos and Veena Sud answering fan questions about The Killing, “the little show that could.” Screen Crush also watches the video and is “excited to see two characters as well-drawn as Detectives Holder and Linden reunited for an all-new case.”

• CNET reports that Season 3’s episodes will be available to stream on Netflix in the U.K. and Ireland the day after they air in the U.S.

To stay up-to-date on the latest news about The Killing, sign up for the weekly newsletter Crime Sheet.