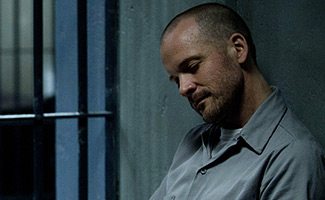 This week, Entertainment Weekly has the first look at Peter Sarsgaard on The Killing and talks Season 3 with showrunner Veena Sud. Plus, The New York Times profiles new cast member Amy Seimetz. Read on for more:

• Entertainment Weekly offers a first look at Peter Sarsgaard as death row inmate Ray Seward on The Killing. Sarsgaard “brings depth and darkness to the role,” according to showrunner Veena Sud.

• Showrunner Veena Sud tells Entertainment Weekly where things stand as The Killing Season 3 begins and discusses the inspirations for the new case, noting, “The story lends itself to one season. We’re going to solve it at the end.”

• The New York Times profiles new The Killing cast member Amy Seimetz and quotes Veena Sud regarding why she cast the actress in Season 3: “She really understands how so much can be conveyed in smaller movements.” Time features a “Five-Minute Bio” of Amy Seimetz, and Seimetz talks about working onThe Killing during an interview with Crave Online.

• Entertainment Weekly spotlights a new Season 3 trailer for The Killing, which features a look at Peter Sarsgaard as death row inmate Ray Seward. TV Equals notes Sarsgaard “exudes menace even from behind bars.”

• Screen Crush has two Season 3 photos of The Killing‘s detectives “back in action.”

• TV Equals showcases a teaser for The Killing Season 3 and speculates that the “new case will be far more gruesome than the Larsen case.”

• USA Today highlights the DVD availability of The Killing Season 2 and notes that the show has received “strong reviews thanks to its richly drawn characters.”