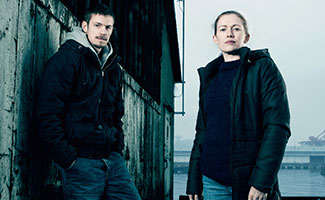 AMC announced today that the critically acclaimed drama The Killing will return for its third season with a two-hour premiere on Sun., Jun. 2 at 8/7c. The new season, which stars Mireille Enos (Sarah Linden) and Joel Kinnaman (Stephen Holder) along with new cast members Peter Sarsgaard, Elias Koteas and Amy Seimetz, is executive produced by series creator Veena Sud, and will focus on a new case, which will be resolved over the course of ten episodes, ending with a gripping two-hour finale.

Season 3 begins one year after the close of the “Rosie Larsen” case (the focus of the series’ first two seasons) with Sarah Linden (Enos) no longer working as a detective. But when her ex-partner Stephen Holder’s (Kinnaman) search for a runaway girl leads him to discover a gruesome string of murders that connects to a previous murder investigation by Linden, she is drawn back into the life she thought she’d left behind.

“We learned so much from the first two seasons of The Killing and are thrilled to be bringing it back with the elements that the fans loved,” said Charlie Collier, president and general manager, AMC. “Veena’s captivating storytelling along with the performances of Joel and Mireille, and the rest of the exemplary cast, will remind audiences of what they loved about the series and provide a season of suspenseful television.”

Added David Madden, president of Fox Television Studios, “From the beginning, Veena Sud has invested The Killing with some of the richest characters on television, testing and sometimes trampling the traditions of the television procedural — and we’re indebted to AMC for the opportunity to present a third season. We’re particularly excited by the new moves of our returning leads, ‘Sarah’ and ‘Holder,’ brought to life so beautifully by Mireille and Joel, as well as the addition to our stellar cast of Peter Sarsgaard in his television series debut, the brilliant Elias Koteas and Amy Seimetz, and a cluster of newcomers whom we hope will dazzle the audience as this new season unfolds.”

Said executive producer and series creator Veena Sud, “I am grateful to AMC, Fox TV Studios and Netflix for their commitment to the show and their efforts in bringing The Killing back to air. I’m also thrilled to be working with our incredible writing team as we continue to explore the lives of ‘Sarah’ and ‘Holder,’ who, like so many real-life detectives, grapple with the consequences to their own lives of a no-holds-barred immersion in the world of a homicide investigation.”

As previously announced by Fox Television Studios, which produces the series for AMC, and Netflix, The Killing Season 3 will be available to Netflix members three months after the season finale airs on AMC.