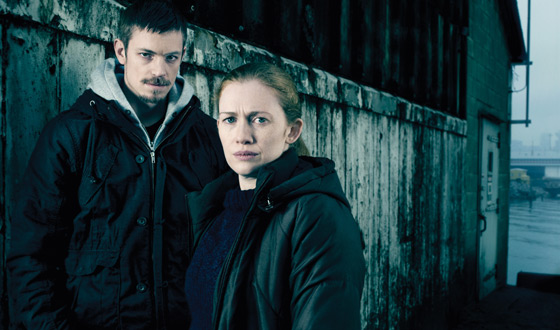 One great way to go deeper into The Killing‘s second season is to check out AMCtv.com’s exclusive interviews with the cast. This week, a look back at Season 2 interviews with cast members who played characters involved with the police investigation. Below is a sampling of what the actors had to say about playing cops — click on their names to read the full interview.

“I think [the lifestyle and mentality of a detective] is fascinating. It’s part of human nature to want to know the truth.” – Mireille Enos (Sarah Linden, the lead detective)

“[If I called the cops and Holder showed up,] I’d be like, “What the hell is going on?” I think I’d feel like I was in pretty good hands, and I think I’d be a bit surprised and wondering if I was getting punked.” – Joel Kinnaman (Stephen Holder, Linden’s partner)

“I talked to my cousin, who is a police lieutenant in Rhode Island. It helps to find out how it works, how much red tape is involved in any police force, and the drama of internal investigations.” – Mark Moses (Erik Carlson, Linden’s boss)

“I think [I often play cops because they] are well represented on television, but maybe there’s something to my look as well.” – Brian Markinson (Gil Sloane, the dirty cop)

Click here for more The Killing cast interviews from Season 2