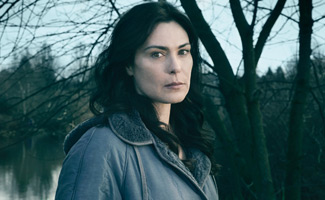 Yesterday, The Academy of Science Fiction, Fantasy & Horror Films held its 38th annual Saturn Awards in Burbank, California, and The Killing‘s Michelle Forbes was honored with the prize for Best Supporting Actress on Television.

The win was one of six total awards for AMC that night, with Breaking Bad picking up three trophies and The Walking Dead taking home two.