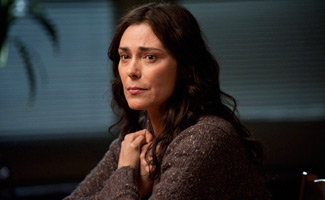 This week, E! Online thinks Michelle Forbes is a possible Emmy nominee, and Joel Kinnaman is “Hot in Hollywood” according to USA Weekend. Plus, Kinnaman’s new movie is set to open, and casting news for Brandon Jay McLaren. Read on for more:

• E! Online features Michelle Forbes in its gallery of potential drama supporting actress Emmy nominees, noting, “We’re not sure where she tapped into two seasons worth of grief, but damn is she a pretty crier.”

• Joel Kinnaman is “Hot in Hollywood” according to USA Weekend, which cites The Killing star’s “unusual family history.”

• TV Guide reports that Graceland, a TV series with Brandon Jay McLaren in its cast, has been picked up by USA Network.

• The Guardian includes The Killing (specifically, Season 2 Episode 10, “72 Hours”) in its TV highlights for the week.