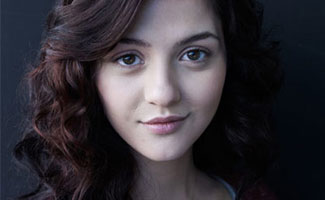 Actress Katie Findlay plays murder victim Rosie Larsen on AMC’s The Killing. In an exclusive interview with AMCtv.com, she talks about trying to figure out her character’s killer and compares herself to Rosie.

Q: When did you find out who killed Rosie Larsen? Did you know at any point while you were filming the show?

A: Oh I found out. I have spies, you know. It was pretty funny. Our trailers on the set started to go unmarked to the point where nobody knew who else was working that day, and it turned a little James Bond. At a certain point I had to know because I had to go to work.

Q: Did you have a guess who it was?

A: I had a sneaking suspicion of who was involved, but I didn’t know exactly how it happened. I did correctly guess who did it and was very triumphant about it: I jumped around like a lunatic going, “I knew it, I knew it, I knew it!”

Q: How hard was it to keep one of the biggest secrets on television?

A: My life has been an endless onslaught! My family quit bothering me about it after the first season, but my friends were calling me daily, one of them always when I was on set.
Everyone has been coming at me with theories. I have one friend who yelled things in my face to see my reactions. Last season my mom had an office pool about who killed me, and everyone would accuse her of cheating because I was her daughter. She eventually ducked out of it because of it.

VIDEO: Inside Episode 213 The Killing: What I Know

Q: Was there anything strange about playing a deceased character?

A: Is there anything not strange about playing a deceased character? I’ve never done it before. It’s interesting when you only have so much time that’s in your hands to tell your part of the story. Having to pop in and out of the plot and work with the space that I had was really fun and challenging.

Q: Did you ever petition for more flashback scenes?

A: No, not at all. I kind of enjoyed the space that I had to work with and I trusted that in the end that they would bring it back around. I don’t think it would work if you saw more of her — you’re getting what everyone else remembers, and it’s sort of all the more haunting for that.

Q: How would you describe Rosie to someone who isn’t familiar with the character?

A: I think she is a lot like what I would have been like had my family been really down on me when I was 16 and 17. She wants to do a lot of things, and try new things, and be a different person every day. She wants to go out there and travel around with a backpack and figure out what’s out there.

Q: Do you think fans react to you differently when they meet you because of the tragic way in which your character lost her life?

A: Yes. It’s funny because I never get recognized ever, and now people that I don’t know come up to me and say, “Oh my god, I’m so glad you’re alive!”

Q: Did you make any suggestions about what your character’s likes and dislikes should be?

A: Everyone was always good creatively about chatting with me and letting me know what’s going on. The nice thing was that I had a lot of freedom with her mannerisms. They wrote this light sweet family girl, and I’m not the lightest or fluffiest. I’m kind of a dork, and they let me be a dork in Rosie’s shoes and it ended up being Rosie.

Q: Did you take home any butterfly memorabilia or other souvenirs from the set?

A: I don’t think so. I was terrified to. The whole two seasons, I’ve been scared to do anything that would give something away. We talked about me maybe taking home the butterfly necklace, but it was so thin. I’m still waiting on my “Vote for Richmond” button so I can wear it around.