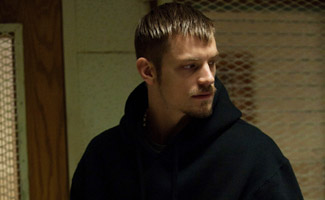 This week, The New York Times calls The Killing “remarkable,” and Gold Derby chats with Joel Kinnaman. Plus, HitFix predictss Kinnaman will be one of this summer’s breakout stars, and recaps and reviews of Season 2 Episode 8, “Off the Reservation.” Read on for more:

• The New York Times cites The Killing as an example of one of cable’s “remarkable goodies that can be recorded or consumed on demand.”

• Gold Derby talks to Joel Kinnaman about the rest of Season 2, which he says “is going to be very rewarding to the viewers who have stuck with the show.”

• HitFix predicts Joel Kinnaman will be one of this summer’s breakout stars because his role in Lola Versus is “an excellent calling card for Kinnaman’s varied talents in an English-speaking role.”

• RTÉ reviews Season 2’s first two episodes (which aired in Ireland this week) and concludes, “It’s great [to] have it back.”

• Matthew Lillard, director of Fat Kid Rules the World, talks to Torontoist about Billy Campbell’s role in the movie and says that Campbell “gives what I feel is the performance of his career.”

• According to Cinema Blend, Liam James (Jack Linden) will star in The Way, Way Back with Toni Collette and Steve Carell.

• For recaps and reviews of Season 2, Episode 8, “Off the Reservation,” check out the California Literary Review, Entertainment Weekly and Zap2it.