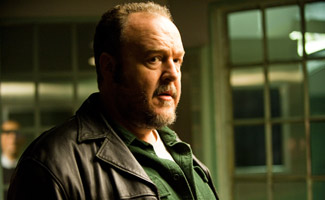 This week, Veena Sud talks to Examiner.com about her philosophy of character development, and Brent Sexton and Eric Ladin look ahead to what’s yet to come in Season 2 for HitFix and TV Fanatic, respectively. Plus, Jamie Anne Allman talks to Wonderland, and recaps and reviews of Season 2 Episode 7, “Keylela.” Read on for more:

• Veena Sud talks to Examiner.com about her philosophy of character development, saying, “I want to write multi-layer and not just cardboard kind of stereotypes.”

• HitFix asks Brent Sexton about the cast’s reaction to finding out the killer’s identity: “It was very favorable. Everybody’s been really excited, I gotta say.”

• Eric Ladin teases to TV Fanatic that the rest of Season 2 will delve into “Jamie’s home life and why he is the way he is and why he acts the way he does.”

• Wonderland Magazine interviews Jamie Anne Allman, who describes Terry as “a selfless, vulnerable character willing to hide behind humor for the sake of others.”

• The New York Daily News includes The Killing in its weekly round-up of the top 10 things on TV last week, commenting that Sarah Linden and Stephen Holder “may be the best dysfunctional cop team on TV.”

• Slate does a character study of Stephen Holder: “In a show of many dark corners and ambiguous characters, Holder has been a reliably bracing force.”

• The Irish Times review of Season 2, Episode 1, “Reflections,” calls The Killing “one to watch” and compliments the “stellar” performances of Brent Sexton, Michelle Forbes and Mireille Enos.

• Twitch has the full theatrical trailer Snabba Cash II, which stars Joel Kinnaman and will be released in Sweden this summer.

• According to The Hollywood Reporter, Billy Campbell is part of the cast of The Scribbler, a thriller that started production this week.

• Toronto’s NOW Magazine reviews Fat Kid Rules the World and applauds Billy Campbell, who “works wonders with the role of a rigid father, investing a potential cliché with depth and complexity.”