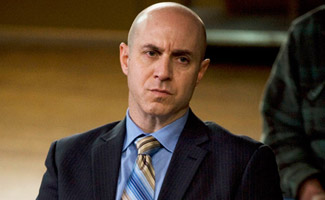 Actor Brian Markinson, who plays shadowy retired cop Gil Sloane on AMC’s The Killing, talks about the pleasure of not knowing what comes next and keeping a straight face.

Q: In Episode 2, Gil says to Holder, “You think you got this job because you’re a good cop? You got it because you’re dirty and everyone knows it.” How did you feel about your character’s reintroduction in the second season?

A: The whole scene tickled me. When I was brought on in the first season, my character name on the page was “Man in Suit.” And they said, “You’re going to be back,” but they couldn’t tell me anything about anything. So I took the job thinking that my character had a history, but that he was a good guy. And then this season, I saw Veena [Sud] after reading the first two episodes and I said, “You really pulled the rug out from under me!” I had just made the assumption that I was going to be this great guy who took care of Holder and had these heartfelt conversations over coffee about his addiction. So naïve. Dan Attias, who directed that episode, said, “This scene is why you took the job.” It was a beautiful and surprising scene. They completely changed tack on me and in that one speech. It just completely turns the tables.

Q: Is that an enjoyable way to work as an actor, never really knowing what’s coming next?

A: There’s something great about it. You’re never really playing the end, you’re playing the moment. I’ve done three films with Woody Allen and it’s the same thing. He sends you only your scene so you really have no choice but to play what’s on the page and not bring a lot of extra stuff, i.e. your ideas, to the character. I think it’s a really cool thing.

Q: Gil never seems to smile. Is it easy for you to keep a straight face?

A: Joel [Kinnaman] is a funny guy and we laugh a lot. But when the camera rolls, most of it is just preparation. If you’ve done the work that you need to do and you learn your lines and you come in with a sense of play… I mean, you can stand on your head in between takes, it wouldn’t matter. It’s a very happy set — what people would be shocked at is how much fun everyone has on the set, even amidst all this darkness. It’s what keeps you going. Otherwise you’d want to pull all of your hair out of your head, though obviously Gil already has pulled all of his hair out of his head.

Q: In the last two years alone, you’ve juggled recurring roles on six different TV series. How is that possible?

A: I’m really blessed. I’m doing three or four different series right now, and so I’m taking off on a motorcycle really soon. I’m really fortunate because of the way I look and where I live and the parts I play, there’s a certain anonymity for me and I can still go out on the street with my kids. It gives me balance in my life.

Q: You often play cops. What is it that makes you ideal to play a police officer?

A: I think, number one, cops are well represented on television, but maybe there’s something to my look as well. I’ve played everything from serial killers to doctors to policemen.

Q: You live in Canada these days. What have you learned about Vancouver from shooting The Killing?

A: The city can be dark. We did most of the shooting throughout the winter and it rains a lot. It literally can rain for four weeks straight. That sort of moodiness really sort of lends itself for the darkness that Veena and the gang have created.

Q: Are there any on-set perks because of all the rain?

A: No, but everybody has rain gear and an umbrella. You walk from your trailer with an umbrella to the set and you pick up another umbrella and walk back. And they’re constantly dabbing at you if you’re shooting outside, even if it’s already raining. We’re all little drowned rats on our show.

Q: When you run into fans in person, do they try to get you to tell who killed Rosie Larsen?

A: Yeah, that’s the first thing they say: “Did you, did you do it? Do you know who did?” And the thing is that none of us knew! I can’t speak for Joel and Mireille but they weren’t even releasing scripts for the last couple of episodes to most of us. My wife — who played the principal that tells Stan that his son has killed some birds in Episode 9 — has ideas, but I really have no idea!

Click here to read an interview from Season 2 with Joel Kinnaman, who plays Stephen Holder.