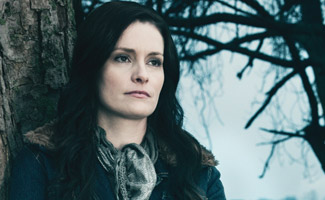 Jamie Anne Allman plays Terry Marek, Rosie Larsen’s aunt in AMC’s The Killing. In this interview with AMCtv.com, she talks about her love of filming shocking moments and which other role on the show she’d most like to play.

Q: Stan and Terry have a passionate moment where they end up kissing in Episode 205. Were you expecting fans to be surprised by this?

A: I was expecting that people at home would be going, “What? No… no… what? What is he doing? Don’t do that! Don’t do it!” And then it happens and they’re like, “Oh man, that’s wrong!” I thought, this is for sure going to be a moment when people scream at the TV. I start talking to the TV like that sometimes — “Don’t do that! No! Leave!”

Q: Do you look forward to those kind of moments as an actor?

A: It’s not like I work harder on any one particular scene than another, but I was excited about that one because I was thinking, this is so wrong! Those are the best things when you’re acting, when you get to dig in because you know it’s an important part of the story. The next day I got posts on my Facebook page like, “What are you doing? Jamie, you’re not supposed to kiss Stan.” And I said, “Well, I didn’t, Terry did. Let’s remember!”

Q: Is it common for fans to confuse your character’s actions for your own?

A: In auditions, I’ve had instances where if I’m playing a very bitchy character, I walk in as that person — then that’s how they think I am, and I have to call and apologize later. That’s why I hope to start doing some comedy soon. It’s fun, and it’s a different facet of my personality that’s there. And I also just have to get it out, or else I might explode. Especially after crying and thinking about dark things on The Killing as much as I have already, it would be good to laugh a little bit.

Q: Do serious themes have any affect on you on and off set?

A: It depends on the scene, but there are some scenes coming up that were definitely hard for me to shake after they said, “Cut.” While you’re working, they set it up, you shoot, and then they want you to start completely over and have no tears. And sometimes you have to do that 20 times. After that happens, if you’re in the moment and caught up in the circumstance, you have to shake it. I’ve had a few times where I’ve needed a few seconds to gather myself before going in and starting again.

Q: What do you think about Aunt Terry’s selflessness? Is that a trait you share with her?

Q: Do you ever think about what it would be like to play someone different on the show?

A: I haven’t thought about that too much, but if I had a choice, it would probably be Gwen. I’d love to play that role — maybe just because I like watching Kristin in it, she does it so well.

Q: You told us last season that the boys who play Denny and Tom were not as interested in hanging out with you as you were with them. Has that changed this year?

A: I feel like now they’re my little brothers. I love messing with them and giving them a hard time, and they are very smart and really good actors, too. The conversations that they have between each other are hilarious. At their age, I never had the kind of conversations they do. They’re talking about things like how worms have five hearts. But I don’t really look at them as kids. I look at them as talented actors who are working and doing their thing.