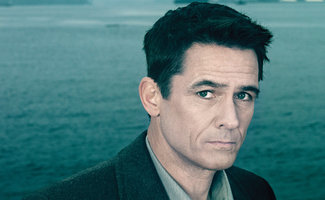 Billy Campbell, who plays Seattle mayoral candidate Darren Richmond in AMC’s The Killing, talks with AMCtv.com about getting paid to lie in bed and which costar he’d most like to take sailing.

Q: At the start of Season 2, Richmond has just been shot. Did you worry that your character was about to get killed off?

A: I thought about it… In Episode 201 Belko kills himself, so that’s one thread nipped right there. If they want to have all their dramatic options open for them, I figured they weren’t going to nip too many threads, at least right then.

Q: So far, Darren has spent all of Season 2 in bed or in a wheelchair. Is it tougher to act when you’re physically constrained?

A: It’s actually kind of liberating in a strange way, acting-wise. There’s not as much blocking to remember, you really can’t futz around too much, and it sort of distills everything in a way. And practically speaking, it was actually a little slice of heaven because I came to work and got to lie in bed for eight hours! There were plenty of days when it came to be lunchtime and I would say, “OK guys, see you later, wake me up when it’s time for the scene after lunch!” I was hooked up to a lot of wires and it was a five minute process to get unhooked, so I did a lot of sleeping.

Q: Richmond was so dapper last season. Do you miss the suit or do you enjoy the hospital gown?

A: I enjoy the hospital gown to tell you the truth, and when I’m knocking around the house at home I wear a sarong, so I appreciate being free and easy. Wearing a hospital gown is very much my preference between that and a suit. I’m not all that comfortable in suits — I hardly ever wear them. In fact, if you were going to make a TV show in an attempt to make me self-conscious, it might be this one — I wear suits, I’m clean-shaven, I have short hair, and I talk politics, all of which are things I’m not very comfortable with.

Q: Are there any real-life politicians you drew from to portray Richmond?

A: The short answer is no — I don’t really tend to work that way. I tend to get comfortable with the dialogue and find out who the person is in the script and try to hit that. People are sort of independent of their occupations and their pastimes. You don’t play a politician or a fireman or a cowboy — you just play a person. Although maybe that’s just a rationalization for the fact that I did no research.

Q: When your character is the Seattle Police Department’s prime suspect, does that affect how fans treat you in public?

Q: You told us last season how much you enjoy sailing. Does sailing inform your experiences as an actor?

A: I’m not sure that it specifically informs my acting work, but it definitely has transformed who I am, and I suppose that has everything to do with acting. The feeling of being at sea has put me in touch with who I am to a greater degree than if I had been on land all these years. So, in a roundabout way, I imagine it does inform my acting.

Q: If you had to be on a boat with one person from the show, who would it be?

A: I’d have to go with Eric Ladin. He’s coming with me soon — he’s going to be the cabin boy.

Q: Is your relationship with Eric Ladin similar in any way to the relationship between Richmond and Jamie Wright?

Q: Your Twitter bio says that you’re a nerd. What’s so nerdy about you?

A: Oh, I’m nerdy about science fiction and fantasy and graphic novels and reading, and I’m nerdy about board games. My favorite board game is a board game I’m working on right now. It’s a game of Napoleonic era naval warfare, and it’s going to be fun.