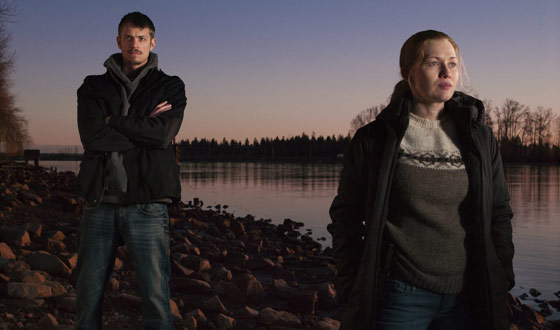 AMC announced from the Television Critics Association (TCA) Press Tour in Pasadena, CA that the hit series The Killing will return for its second season with a two-hour premiere on Sun., Apr. 1 at 8PM | 7C. Following the premiere, on Sun., Apr. 8, The Killing returns to its regular time slot at 9PM | 8C.

For those looking to catch up on the series, all 13 episodes from the Emmy-nominated first season will be available On Demand beginning Mon., Mar. 5.

Based on the Danish television series Forbrydelson, The Killing follows the police investigation of a young girl’s murder in Seattle and the hunt for her killer. Written and executive produced by Veena Sud, The Killing stars Mireille Enos (who garnered an Emmy nomination and a Golden Globe nomination for her portrayal of detective Sarah Linden), Joel Kinnaman, Billy Campbell, Michelle Forbes and Brent Sexton.