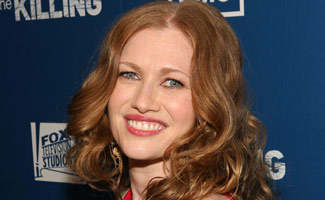 • StyleBistro has a photo of Mireille Enos at the Golden Globes, praising her gown for looking “gorgeous against her fair skin, particularly when complemented with a bright red lip color and a stately updo.”

• While on the red carpet, Enos tells TVLine that Season 2 “picks up the moment you left it behind, and from there the stakes just jump 500 percent.”

• MTV also catches up with Enos on the Golden Globes red carpet, where she says, of Season 2, “Everything gets more and more personal, and the writing is so exceptional.”

• Also at the Golden Globes, Enos speaks with E! Online about World War Z, the upcoming film in which she plays Brad Pitt’s wife: “It’s like zombies are the new vampires. It’s taking over.”