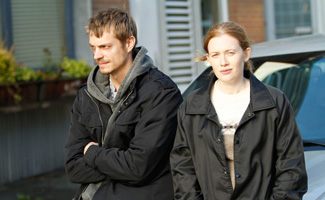 This week, both Variety and The Hollywood Reporter consider The Killing‘s chances of being nominated for a Golden Globe. Plus, The Killing nears its debut in the United Arab Emirates, and two new behind-the-scenes featurettes for Joel Kinnaman’s upcoming film have been released. Read on for more:

• The Hollywood Reporter thinks Mireille Enos is a potential Golden Globe nominee, saying that her portrayal of Sarah Linden “redefined the female cop.”

• The Killing is coming to the United Arab Emirates, and Ahlanlive.com has the scoop on the show’s “dark, beautiful and tragic story, one unlike any other drama series.”

• MTV News makes note of Billy Campbell’s prediction on who would win in a fight between actress Mila Kunis and actor Bradley Cooper.