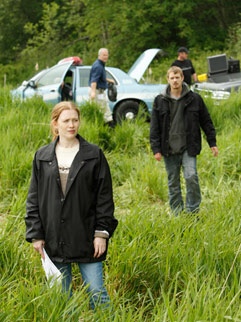 With The Killing making its debut Down Under this week, Mireille Enos speaks to Australia’s Sydney Morning Herald, and New Zealand’s Otago Daily Times calls the show’s acting “exceptional” and “captivating.” Plus, Joel Kinnaman is prominently featured in the poster for the upcoming film, The Darkest Hour. Read on for more:

• With The Killing debuting in Australia this week, The Sydney Morning Herald talks to Mireille Enos and calls her role “a career-defining performance.”

• The Killing also premieres this week in New Zealand, and the Otago Daily Times previews the show, remarking, “the acting is exceptional all around. [Michelle] Forbes…is especially captivating.”

• Joel Kinnaman is prominently featured in the poster for the upcoming film, The Darkest Hour, which opens Fri., Dec. 23. FirstShowing.net has high hopes for the film, believing it will be “a fun winter action flick.”