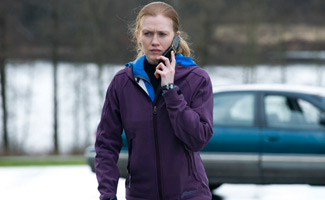 This week, Mireille Enos speaks with both Digital Spy and Female First, while TV Guide makes note of The Killing‘s strong showing in this year’s Emmy race. Plus, the Daily Mail has new photos of Enos and Brad Pitt on the set of World War Z in London. Read on for more:

• Mireille Enos discusses filming Episode 11, “Missing” with Digital Spy: “It was one of the most exciting weeks of shooting in my career. Joel Kinnaman is just an incredible partner to work with, and it was just the two of us.”

• Mireille Enos tells the U.K.’s Female First she was attracted to The Killing because the “writing of the pilot was incredibly filmic and the pacing of it was slower than anything that I had ever read for television.”

• Though The Killing didn’t win any Emmys this year, TV Guide remarks that “six nominations for the first season is a very strong showing, including lead and supporting actress, plus writing and directing nominations.”