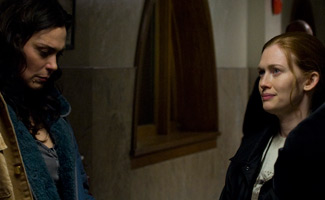 This week, Mireille Enos and Michelle Forbes stroll the red carpet at the 2011 Emmy Awards, and Forbes takes part in the Los Angeles Times‘ Emmy roundtable for first-time nominees. Plus, Veena Sud takes part in an Emmy writers’ panel, and Enos discusses filming World War Z alongside Brad Pitt. Read on for more:

• During a Los Angeles Times Emmy roundtable for first-time nominees, Michelle Forbes says it was “an actor’s dream” to play such a dark role. The Times also has a video interview with Forbes discussing the Season 1 finale and the show’s grimness.

• TVWeek covers a writer’s panel that included Veena Sud, who talked about “her instincts for The Killing coming from a dark place, honoring that, and knowing her show was cable-only.”

• The Guardian reviews Episodes 12 and 13, which just aired in the U.K., and remarks, “I’ve found myself admiring Mireille Enos’s performance more with every week.”