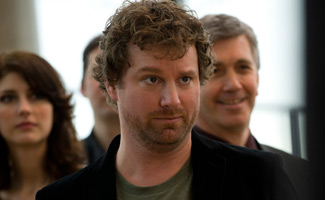 Patrick Gilmore, who plays wealthy business mogul Tom Drexler on The Killing, spoke exclusively with AMCtv.com about the real-life inspiration for his character, wearing a Speedo for the first time, and what he would do if he were as wealthy as Drexler.

Q: Was it fun playing a wealthy mogul and playboy?

A: Absolutely. It’s the anticipation of where he would be, what he would be doing, what ridiculous things he would be saying, what he’ll be wearing. Especially just before the “Beau Soleil” episode, when the wardrobe ladies asked me to try on a Speedo.

Q: Do you wear Speedos?

A: Never. They gave me about ten different ones to try on. I liked one that was more of a body suit, but the powers that be decided to go with the one that looked like dental floss.

Q: Did you model Drexler after any specific public figures?

A: The model they gave me was Mark Cuban. I don’t think it’s a direct impersonation, but it’s definitely somewhere to start: a self-made millionaire, young, has the world at his hands and is able to manipulate the environment and the world around him. That’s clearly something that Drexler has an ability to do.

Q: Are you as confident as Drexler is?

A: I wish I was. Unfortunately I’m an over-thinker. I’ll come home and replay everything I said all day, whereas Tom has no room for editing or for replay. But yeah, I wish I had that confidence. I’m too self-aware.

Q: Tom Drexler is a big basketball fan. Do you play much basketball? Did
the basketball scenes come naturally for you?

A: I was a football player, I skied, I’m comfortable with sports. But my basketball history is I tried out for the basketball team in grade five and didn’t make it. I was traumatized and I never went near it after that. I like to think I’m a worldly person. I know things about things, but I know nothing about basketball. So when I got the script where I’m dribbling, I panicked. On the day we were filming it, they had me do a lay-up, but the ball went everywhere. They had to do a number of takes. I’d be looking at the net, and the ball would fly out of my hands and into the camera.

Q: Did you practice?

A: I had a week to rehearse. T.V. moves so fast that there was no time to coddle me.

Q: Your character lives in a swanky house. Was that someone’s real house?

A: That is a condo complex in downtown Vancouver, and that’s the common room. There’s a full-on bar. I’m not sure if the basketball court was there, but above there was a gym and climbing wall and a huge patio. The stuff with the pool is a different place called The Keefer —
It’s well-known in Vancouver, like a condo rental.

Q: You had a popular role on Stargate Universe. What are the biggest differences between working on a sci-fi show versus a reality-based show?

A: I just got back from DragonCon in Atlanta. The Killing has their fan base, but it’s very different. For sci-fi fans, this is a way of life rather than a passing fancy. I got to meet the fans, and actually a number of them came up and said they love The Killing.

Q: You tweet a lot. Have you gotten many tweets from Killing fans?

A: Yeah, every time an episode airs. I’m not a real likeable character, but I like to think he’s the character you love to hate. Twitter is great. It’s that instant feedback that three years ago you never got.

Q: What kind of things do people tweet to you?

A: Everyone’s shocked at my language, the things that Tom says, the crass things he does.

Q: If you were as fabulously wealthy as Tom Drexler, what would you do with your money?

A: If Patrick Gilmore was as wealthy as Tom Drexler, I think I’d stop working. I’d hang up the skates, buy an island. I think there would be a good two months of feverish shopping and paying off everybody’s debts. A couple black-tie, big-band parties, and then I would travel for a good couple of years in style. I don’t think I’ve ever flown first class before.