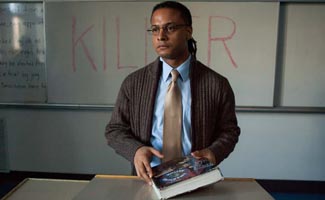 Brandon Jay McLaren plays Rosie Larsen’s teacher Bennet Ahmed on The Killing. In an exclusive interview with AMCtv.com, the actor talks about his assault scene with Brent Sexton (who play’s Rosie’s father) and getting public support from fans of the series.

Q: I’ve heard that you really wanted to work on the show after you read the pilot script. Was there a particular scene that caught your eye?

A: It was the opening scene when Rosie’s running. The way it was written in the pilot, the way Veena wrote it, literally on the first page I was like, this is something special. This is really good.

Q: How is Bennet different from other characters you’ve played?

A: Bennet’s a very complicated man. I don’t know if I’ve ever played someone with as much moral conviction as Bennet, which was good. He definitely has a certain strength to him that was really unwavering through most of the show, because he’s doing something that he believes in with his whole heart.

Q: Have you ever had to keep a secret that long?

A: I actually have. It’s hard and often unpleasant. I guess for Bennet the secret for him was worth keeping until it came down to either his secret or his life.

Q: What was it like getting beat up by Brent Sexton [in Episode 9, “Undertow”]? Did you have a stunt double?

A: I had a stunt double, but the double laid on the ground in the rain and I did most of the getting beat up. It was freezing that night — it must have been 25 degrees. The ground was frozen, it was three in the morning, and we didn’t have a lot of time to shoot it, so we did a quick rehearsal and actually Brent tagged me in the face during rehearsal. Brent’s a big dude, so I was like, oh man. It was a hard scene to shoot, but it was definitely worth it in the end.

Q: How much height does Brent have on you?

Q: Besides getting tagged during rehearsal, was that scene fun to shoot?

A: Yeah. There’s something thrilling about going to a place where you feel like your life might end. You know that sort of adrenaline like you’re screaming for your life. It’s oddly therapeutic in a way. I definitely had a sore neck n the morning from where he was grabbing my neck and pounding it on the ground.

Q: How did you react when you found out that Bennet was one of the prime suspects? Did it change the way you played the role?

A: When I found out, I was elated. I didn’t find out until about four or five episodes in that I was hiding something so big. Once I knew I was innocent, you can sort of play what I like to call the arrogance of innocence. If you know you’re innocent, there’s a certain arrogance — like, I don’t care what evidence you have or may think you have, I know that I didn’t do this.

Q: Did any high school teachers encourage you the way Bennet encouraged Rosie?

Q: You were raised in Vancouver. Were you familiar with any of the locations where you shot?

A: Yeah, I knew everywhere. I knew about the high school where I taught — I used to play basketball there. It was cool, kind of a full circle moment, thinking 15 years ago I was playing a high school basketball tournament here, and now I’m doing a show.

Q: Do people in the street recognize you for The Killing?

A: Yeah, I get recognized for The Killing all the time. People yell out, “I hope you didn’t kill her!” They yell that out in the street.