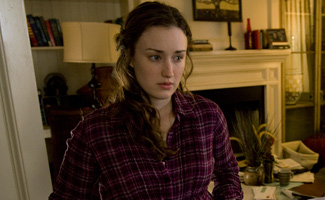 Ashley Johnson plays Bennet Ahmed’s pregnant wife Amber on AMC’s The Killing. In an exclusive interview with AMCtv.com she describes what it’s like to wear a prosthetic belly and admits a one-time crush on her real-life P.E. teacher.

Q: How heavy was that prosthetic belly?

A: It wasn’t very heavy. It was just very strange having this obstruction in front of me that I wasn’t used to. Certainly it limits your movement quite a lot. I think I instantly felt pregnant, and a lot of people that were on the set — not everybody had read the scripts because they kept everything pretty hush-hush — a lot of people thought I was pregnant, which was great. There was a little coffee shop across the street. When we had some down time I’d go over there and grab a coffee, and people would be like, “Um, I don’t know if you should be drinking coffee because you’re pregnant.” And I was like, “No, no, it’s fake.”

Q: Did you pull out the pillow and do a show-and-tell?

A: Yeah, and I think people thought I was more crazy because I was wearing a pillow.

Q: Did anyone give you advice on how to act pregnant?

A: We have five kids under three in our family right now, so I’m so used to everybody being pregnant around me, which was great preparation. A lot of it was just kind of the movement. I was trying to copy my sister and my sister-in-law. I think that kind of movement is pretty typical in women when they’re pregnant.

Q: What did you enjoy most about playing Amber?

A: The special thing about the show is that the writing is so great. I love that I married my high school teacher and I’m pregnant. I think it was just interesting to sort of put yourself in that place of, I’m married to someone who’s around young girls all day and I’m pregnant and I feel ugly. I just tried to make it as real as possible.

Q: Did you ever have a crush on any of your high school teachers?

A: I did, actually. There were probably a couple. None of them were ever pursued, of course, but I remember in middle school it was a P.E. teacher who was the cool young teacher. He was probably in his late twenties at the time. I don’t know if it’s because he was cute or because he was a new young teacher, but every girl had a crush on him.

Q: What was the set of the Ahmed household like? Was there any part of it you’d incorporate into your own place?

A: It was such a great house. It was pretty hard to get into because there were a lot of stairs to get up to the actual apartment — the first couple times took a while to walk with the pillow. But it was such a cute apartment. I would live with [Amber]. It was one of those places that was a house turned into a duplex, where the top was one apartment and the bottom was another. There was a cat who’d try to come up, and we’d hear him crying.

Q: There are a lot of female characters on the show. If you could swap roles with any of the other actresses, which one do you think you’d most enjoy playing?

A: The women on the show were unbelievable. I couldn’t see myself in any of those roles, now that I’ve seen them.

Q: Do you think you’d rather play a detective over a grieving mother?

A: A detective definitely would be fun to play. I can’t even imagine what Michelle [Forbes] has to go through every day to put herself in the place of losing a daughter. I think I would probably end up in a mental institution. I’m sure that isn’t the easiest of roles.

Q: You’ve been acting ever since you were a kid. What do you know about the business now that you wish you’d known when you were younger?

A: I don’t think there’s anything I know now that I wish I would’ve known then. I’ve been very fortunate in my career. I know you hear horror stories about child actors, but I think in my family when I did start acting it was never a big deal. My parents were like, “It’s just your job, you can do it as long as you like it, and the day you don’t like it you can stop.” It was never pushed on me, and I think because of that I’ve always loved it.