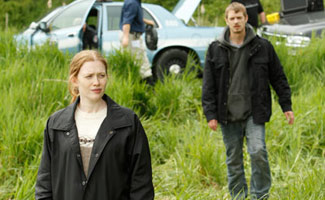 This week, The Vancouver Sun chats with Veena Sud, Michelle Forbes talks Season 2 with Digital Spy, and there’s more reaction to The Killing‘s six Emmy nominations. Read on for more:

• During a conversation with The Vancouver Sun, Veena Sud reveals the best piece of advice she received when she was still a young writer looking to break into the business.

• Michelle Forbes talks to Digital Spy about Season 2, noting that the writers will be “going back in the writers’ room in the next couple of months.”

• The arts editor for the Buffalo News callsThe Killing his “favorite show by far” and laments that the show was not nominated for an Outstanding Drama Emmy.

• CNN also expresses their disappointment in The Killing‘s lack of an Outstanding Drama nomination in their roundup of who they thought got snubbed.

• Billy Campbell and Eric Ladin were both in attendance at the Breaking Bad Season 4 premiere party.

• AMC’s The Walking Dead blog has an interview with director Gwyneth Horder-Payton, who directed The Killing‘s third episode, “El Diablo.”