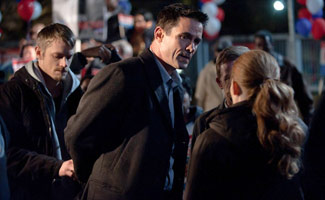 The Killing‘s Season Finale may be over but that doesn’t mean the news coverage of the series (and its creative team) has abated. This week, Executive Producer Veena Sud was heard over the radio airwaves of Southern California and actor Joel Kinnaman was spotted on the streets of NYC. For more news, read below.

• The New York Post has a photo of Joel Kinnaman sporting shades in New York City.

• MediaPost says The Killing “was (and still is) one of the most talked-about television series of the year.”

• Gold Derby thinks The Killing has a “good chance” at a best drama Emmy nomination.