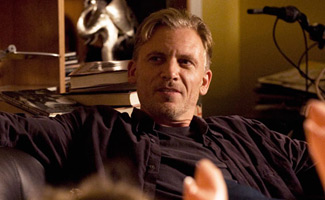 Callum Keith Rennie stars as Sarah Linden’s frustrated fiancé Rick Felder on The Killing. In an exclusive interview with AMCtv.com, Rennie talks about working in his hometown, becoming obsessed with his characters, and finally getting to play a nice normal guy.

Q: You live part-time in Vancouver. How much have you actually worked in the city?

A: Quite a bit, from Battlestar Galactica to The X-Files and lots of other shows.

Q: Did you ever throw any Killing get-togethers at your house?

A: [Laughs.] No, actually, I didn’t. I just stuck to my own thing. No real get-togethers or people asking where to go and where to eat. It was a great cast of people to spend time with on the set, but I was sort of in and out of the show so quickly.

Q: Could you identify with Rick’s situation?

A: I liked the idea of trying to hold onto something and still be honorable. He was a strong sort of man who’s trying to keep his relationship together — trying to be strong enough to continue working on it but not wanting to feel left out in the cold. It’s funny because it’s a murder mystery show, but then my story was like a show within that show. The only info I heard about the rest of the show was through Mireille. I tried to stay out of learning too much about the other stuff and was focused on what we were trying to accomplish together.

Q: Do you know anyone like Linden, who must be literally dragged away from her work?

A: I know a lot of people with obsessive qualities, and there’s a positive and negative part to it. There’s the appeal of someone who’s so deadly focused on something that they want or desire — there’s a dedication and a single-mindedness that’s great. But then if it goes on too long it becomes a psychosis. What’s the French term for it? Idée fixé.

Q: Have you ever gotten to that point in your own life?

A: Yeah, I mean you get obsessed about characters and how to play them and become overly focused. You can also just do that with your golf game and other pastimes.

Q: A lot of people know you for playing an evil cylon on Battlestar Galactica and a rich party boy on Californication. Did you like playing a nice, normal guy for a change?

A: That was one of the choices I made when I decided to do the show: to go with a straight-up normal guy who was just trying to be in a relationship. That appealed to me. I wasn’t some insane person or a robot.

Q: Did you feel like you got to be yourself a little bit more?

A: No, I was more myself in Californication. But there’s things that are closer to me in some ways. There’s a normalcy to Rick because we didn’t really get into his story. His history could be quite vast and bizarre, but none of that was really dealt with. Maybe it will be at some point.

Q: You and Michelle Forbes both starred in Battlestar Galactica. Did you know her from that show, and did you get to see each other on The Killing?

A: No, I’d never met her. I’d heard about her through mutual friends who worked with her on Durham County and spoke highly of her. When I got to meet her on The Killing set we chatted it up. It was awesome.

Q: There were points during the season when some fans thought Rick might be the killer. Did that thought ever enter your head?

A: Of course, because I’m always the killer.

Q: Did you follow the episodes as they aired?

A: I checked in every now and then to see where it was at, but I’m not big on watching my own work. I like watching other people’s work. I watched the finale, which I thought was great.