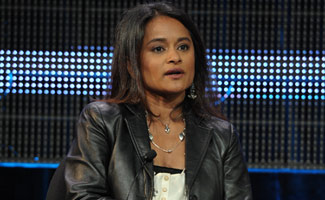 AMCtv.com offered viewers the opportunity to submit questions for The Killing Executive Producer Veena Sud. In her responses, she talks about the reaction to the season finale, why she chose Seattle as the setting, and when Rosie Larsen’s killer will be revealed.

Q: Are you surprised by the response to the finale? — McGillicuddy

A: I am not surprised that people feel so passionately about the show. I’m so grateful that, from day one, fans have responded to The Killing the way they have, and I continue to be really grateful to our fans for all the passion and the conversation they bring to The Killing. I am aware there’s been both excitement and frustration around the twist at the end of this season. Our goal was not to mislead but rather to do something different, to take the time the story needs to fully unfold — to explore who Holder is and what’s happened to Richmond, along with who killed Rosie Larsen. I can promise viewers, you will find out who killed Rosie Larsen in Season 2.

Q: Help me understand the rationale behind not revealing the killer in Episode 13. Can you give me a good reason for the choice you and the producers made, and why I should watch next season? — BetsyMichaud12

A: From the very beginning of The Killing, we set out to tell a very different kind of cop show. There was this idea of let’s not create a formula show, whether it’s a 45-minute formula or a season-long formula. Let’s follow this story to its natural end and not force something that is not true to the type of storytelling we’re attempting here. I’m a big fan of Breaking Bad, and I think Breaking Bad does cliffhangers so well. I loved the last season’s ending. It caused so many conversations among family and friends, and conversations about character and what would you do. Those conversations are really exciting to me. We’ve truly become interactive with the shows we watch.

Q: Do we learn who the killer is in Season 2? — MarMin

Q: Did you shoot multiple endings to the first season and decided to go with the one we saw based on the show being renewed? — Iden F

A: No, we did not shoot multiple endings. We had one ending and that’s what we went with.

Q: Just curious why you would take Holder and turn him into a potential dirty cop? What is the motivation behind this bold move? – JhaneBond

A: Almost every character on the show has a secret and over time — this season, next season — we get to learn about secrets. Everyone’s got a secret, including Holder, and that’s something I’m endlessly fascinated with. I’m sorry to be so vague about it, but I can’t go into detail because that will give away some Season 2 stuff.

Q: I would like to know how the writers were able to portray the grief the Larsen family endures so realistically. They were so hard to watch because the writers got it so right. — donna

A: It was really important to me, as someone who’s written crime drama in the past, to get it right. I met a national organization in Los Angeles called Compassionate Friends, a group for parents who’ve lost their children. They generously opened up their doors and their lives to myself and my writers and just walked us through everything that they went through. They said please tell our story, but tell it right, because too often on television we’re ignored or we’re smiling at the end because the killer is caught and that’s not how it happens when your child is murdered. I’m a parent, half the writers are parents, and it was very difficult to go through this process as writers, but I think it’s very important. A murder sends shockwaves that last through generations, and I think sometimes we forget that in our rush to puzzle our way through to the end and treat murder as entertainment.

Q: I suspect that based on how U.S. search warrants work, especially in Indian territories, you needed to adjust [from the original Danish series] at least some procedural aspects of the story. Did you have a legal adviser for the show? – Psykl

A: We did have an advisor in the Seattle Police Department who was very generous with his time. We would ask him the veracity of the things we were trying to do, specifically in Seattle and Washington State. In addition to that, I’ve written cop shows for a while so I know a lot about procedures. We also had a former political consultant on staff who knew a lot about the exact procedures you need in order to get into Indian land and deal with tribal courts.

Q: I love the setting. Why Seattle? — monda g

A: I love the setting, too. I fell in love with Seattle when I went up to do research and was looking for a city to place the story in. The original series is set in Copenhagen and I was really blown away by how viscerally beautiful and dramatic the skies are there. I was looking for something similar, and it felt like Seattle was the perfect fit. But what’s so interesting to me about Seattle is on one level: gorgeous, breathtaking, dramatic. On another level: deadly. Puget Sound is gorgeous, but if you fall into it, it’s frigid and you’ll die of hypothermia. The city itself encapsulated, thematically, what the series is about: nothing is what it seems, initially. The other reason I chose Seattle is I was looking for a city we usually don’t associate with cop shows, somewhere really different from Los Angeles or New York, somewhere you don’t usually think of as gritty or urban.