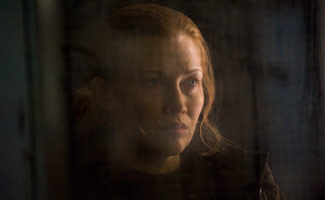 This week, Sarah and Holder evaded the FBI and unearthed new evidence; Mitch endangered the boys, prompting Stan to take matters into his own hands; and Richmond tried to climb back into the Seattle mayoral race. You can learn more about these developments by checking out the following online extras:

• Sneak Peek of Episode 9 — A look at next week’s episode. UPDATE: This video is no longer available.

• Suspect Tracker — Fans voted Belko Royce their top suspect in last week’s poll, as the Larsen family friend finished with 27% of the vote. Who will be the prime suspect this week? Cast your vote, discuss your theories with other fans, and be sure to enter the weekly drawing to win an iPad.

• How Would You Be Cast in a Crime Thriller? — Take a personality quiz and see which part in The Killing you’d best be suited for.