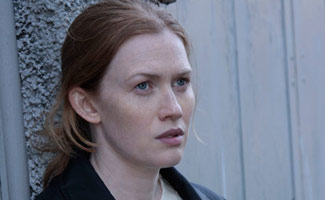 Entertainment Weekly highlights The Killing this week while TV Guide praises Michelle Forbes for her performance as Mitch Larsen. Just as nice, The Hollywood Reporter honors The Killing with the top spot on its weekly power rankings for the second time in a row.

• Entertainment Weekly features The Killing in its latest issue, proclaiming, “AMC has a new watercooler hit on its hands” that’s “by turns bleak, touching, and exhilarating.” (No Link)

• TV Guide cheers Michelle Forbes for “her dead-on performance on The Killing.” At No. 3 on the magazine’s list of the week’s top moments is the discovery of Rosie Larsen’s body in the trunk of the car raised from the river. It also says The Killing took “top honors among new shows premiering in a busy first week of April” and showcases a preview of Episode 4, “A Soundless Echo,” and asks if Stanley Larsen can “learn how to start letting Rosie go.”

• For the second week in a row, The Killing is No. 1 on The Hollywood Reporter‘s Power Rankings: “a lot of savvy viewers have bought in and are loving it.”

• After watching the premiere, NPR writes, “So much mystery! So many signs that I’m headed for a long and satisfying commitment!” The Dallas Morning News states, “Television gold continues to be mined by AMC,” and the Orlando Sentinel calls The Killing the “best arrival this spring.” indieWIRE thinks The Killing “remarkably well done,” while canada.com states it’s “TV of a very high order.” From the Chicago Tribune: “I’m totally hooked.”

• TVLine says Episode 3, “Diablo,” delivered 2.6 million total viewers, “representing a dip of just 4 percent from its two-hour premiere.” The Hollywood Reporter has more on the numbers, while The Wrap and Entertainment Weekly covered the ratings too. The Pittsburgh Post-Gazette mentions how The Killing‘s ratings are “a welcome development because it was most deserving of success among the new programs.”

• In a Baltimore Sun article on crime dramas attracting more women, Veena Sud says her goal was to “take every cliché of female detectives and ground them in reality, right down to their shoes.” The Montreal Gazette praises “the textured performance of Mireille Enos,” and Enos herself tells the Wall Street Journal that “roles like this, you’re lucky if you get one in your career.”

• Billy Campbell talks to Assignment X about wishing his character could dress more like Joel Kinnaman’s Stephen Holder. The National Ledger quotes Campbell on The Killing‘s future: “Definitely there could be a Season 2, absolutely.”

• Brent Sexton tells PopStar.com that the show is “utterly human in the development of the characters.” And he talks to Poptimal about checking out Forbrydelsen, the Danish version of the series.

• Blast interviews Kacey Rohl (Sterling), who shares, “She [Sterling] has a secret that she isn’t willing to tell right away.”

• If you’re enjoying The Killing‘s Nordic noir vibe, then Entertainment Weekly has some book recommendations for you.