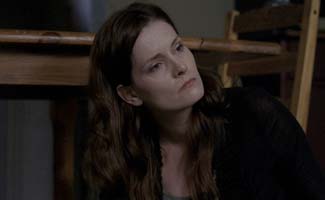 On The Killing,Jamie Anne Allman plays Terry Marek, Mitch’s younger sister and doting aunt to the Larsen kids. In an exclusive interview with AMCtv.com, the actress talks about working with kids, her roots on a Kansas farm, and how she owes her acting career to a bike accident.

Q: How is this character different from others you’ve played?

A: In every role a part of me gets to come out. In this one it’s been my quirky sense of humor, in moments with the kids. I get to mess with them. I’m really enjoying being Aunt Terry.

Q: Have you worked with children before?

A: I’ve worked with babies, but [Evan Bird and Seth Isaac Johnson] are, like, ten years old. My first day, they hung out with me and were like, “We love Rosie!” The girl [Katie Findlay] that plays Rosie. They just seemed so bored with me. Over time we related. I pick on them and try to kiss them and they’re like, “Ewwww! Get away.”

Q: Are you as protective of your siblings as Terry is of her sister and nephews?

A: To a fault. My brother has not been happy about me interviewing all of his girlfriends. I’m from a farm in Kansas, so I have that blunt thing. I’ve kind of stepped into my femininity. I was a big tomboy and if girls were not nice to my brother, boy, I had to have a little sit down with them. But then when he got bigger he got mad at me. [Laughs] I eventually had to stop.

Q: Do you ever think about the idea explored in The Killing that you can’t always protect those you love?

A: I’ve been thinking about that ever since I thought about having kids. That’s one thing my mom is really good at, which is an amazing quality. She’s able to let me make my own decisions and fail and still be there and love me no matter what. I’d be like, “Why didn’t you tell me that guy wasn’t right for me?” She’s like, “You needed to find out on your own.” That’s been hard for me to do, even with friends. I’ll see them making a mistake and I have to just let them. But to think about them making a mistake or getting in trouble where it would lead to death is — oh man that would be horrible.

Q: It makes me think of the moment in “The Cage” when Terry asks Mitch why she hadn’t called Rosie all weekend.

A: I felt so bad asking that question. I kept telling the director, “Why would I say this?” Some questions come up in my mind, but I don’t ask them. So I had a hard time just saying that to her. But why didn’t she call all weekend? Seriously. [Laughs] She’s a teenager. Who wouldn’t call their kid all weekend long? That’s the point.

Q: Terry has to try and help her nephews understand what happened. Do you remember the first time you learned about death?

A: We had lots of animals. My mom always told me the truth: That animals die and when I get old I’ll be able to see them again in heaven. [Laughs] That’s what she said. I’d rather hear that than that I’m never going to see the animal again, because we bottle-fed animals and then they would die. Coyotes killed some. They froze in the winter. I saw animals die during birth. We lived on a lovely farm of death. [Laughs] I’m just kidding, but when you grow up on a farm you see that a lot. I had it explained to me many times.

Q: Like Terry, you seem to be the one that’s always helping others. Is there a time when you were on the receiving end?

A: Oh yeah. When I was auditioning years ago, my car died and I was riding my bicycle around to get places and I had a breakdown. I was taking my bicycle to go to the dry cleaners and I was looking at someone on the side of the road and ran into a fence and dropped the whole bag of stuff all over the ground and everyone was starring at me. So I called my family. My brother bought me a car. I still have that car and I will drive it until it dies.

Q: Just think, if he hadn’t gotten you that car, you might not be on The Killing today.

A: Yeah, I know, right? You never know. I would have rode my bike all the way for The Killing.