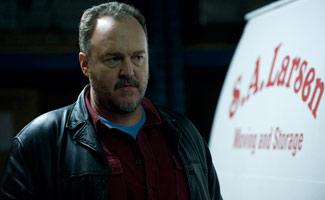 This week, Rosie’s teacher provided Sarah and Holder with a new piece of evidence; Richmond’s campaign team planned a new anti-crime television commercial; Mitch continued to struggle with the loss of her daughter; and Stan became more determined to find Rosie’s killer. You can learn more about these developments by checking out the following online extras:

• Sneak Peek of Episode 6 — A look at next week’s episode. UPDATE: This video is no longer available.

• The Killing Episodes 1 and 2 — The two-hour series premiere is currently streaming online (but only through this Wed., Apr. 27) and is also available via Video on Demand (check with your local cable provider). UPDATE: These videos are no longer available.

• The Killing Episode 3 — The third episode is currently streaming online (available through Wed., May 4) and is also available via Video on Demand (check with your local cable provider). UPDATE: This video is no longer available.

• The Killing Episode 4 — The fourth episode is currently streaming online (available through Wed., May 11). UPDATE: This video is no longer available.

• Suspect Tracker — Bennet Ahmed was the fans’ top suspect in last week’s poll, finishing with 28% of the vote. Who will be the prime suspect this week? Cast your vote, discuss your theories with other fans, and enter a weekly drawing to win an iPad.

• Rosie’s Room — Explore Rosie Larsen’s virtual interactive bedroom to see how she lived — and to see if you can discover clues as to why someone wanted her dead. Be sure to look for this week’s new clue: Rosie’s Super 8 video.

• The Killing Sweepstakes — Enter for your chance to win a 54″ plasma HDTV, a Blu-ray player, and AMC’s ultimate mystery DVD collection. Sweepstakes ends this Fri., Apr. 29.