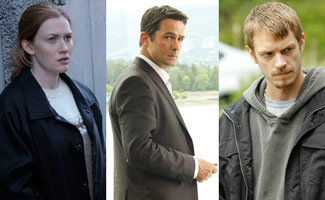 With the series premiere of The Killing only days away, it’s not just viewers who are getting excited for the debut of AMC’s latest original series — the cast is too. In a series of six videos, the cast shared their thoughts with AMC about a number of The Killing-related topics:

• One Day – The cast talks about The Killing‘s unique pacing, where every episode represents one day in the solving of the Rosie Larsen crime.

• Through the Prism of the Crime – The cast describes the different ways in which viewers will become engaged with the series.

• Everyone Likes a Good Mystery – The cast shares their excitement about the surprises and twists that are keeping them glued to AMC’s new original series.

• Depth of Character – The cast explains how the series’ emphasis on the characters separates it from the typical crime show.

• Something About Rosie – Mireille Enos, the actress who portrays Detective Sarah Linden, describes what keeps her character invested in the Rosie Larsen case.

Haven’t already caught them on the air? Don’t worry — you can watch them right now on AMCtv.com. The Killing‘s 2 hour series premiere airs this Sun., Apr. 3 at 9PM | 8C.