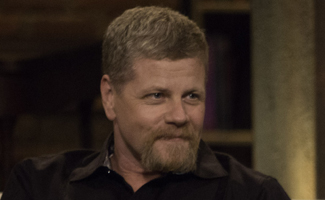 This Sunday at 10/9c, AMC’s live The Walking Dead after show Talking Dead airs at 10/9c — immediately after The Walking Dead Episode 505, “Self Help.” Joining host Chris Hardwick this week will be The Walking Dead cast members Michael Cudlitz (Abraham) and Josh McDermitt (Eugene), as well as Executive Producer Gale Anne Hurd. They’ll be taking questions live during the broadcast, so go to TalkingDead.com now to submit your queries. Then, during the episode, go to talkingdead.com/playdead on your phone, tablet or computer to answer real-time questions posed during the show. The results will be broadcast and discussed on the show in real time!

Come back to TalkingDead.com the next day to check out exclusive video and photos from the episode.

Talking Dead airs this Sunday at 10/9c immediately following The Walking Dead at 9/8c on AMC.