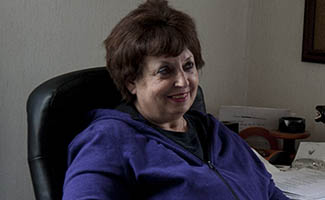 Small Town Security’s Chief Joan Koplan shares workplace wisdom in her “Ask Joan” advice column. This week, Joan fields questions about how to deal with office hoarders and setting standards for your staff.

Q: How do you deal with a hoarder? Some people I know have all the office papers on their desk and I am thinking: Get a match and go for the burn. What do you think? –– ms_do_little

A: As you know my husband is a big hoarder. Well, let’s be honest. He’s one of the biggest pigs in the world. It’s hard working with him, but I have to. I don’t like him half the time, but I still love him. [Laughs]. But I lay down rules. For example, he is not allowed to use anything of mine. I tell him, “No.You can’t sit in my office to make a phone call, because then you’re just going to leave your crap in there and make a mess.” Hoarding is a sickness, really. They have to stop infecting the office. It’s just disgusting. Nobody should have to work with that. Well, unless you’re me and you’ve been married to the sick piggy for 44 years.

Q: I totally screwed up a project I was in charge of at work. What’s the best way for me to recover? — Catherine Cantieri

A: Years ago, I screwed up big time. I mean really big. Not to name names, but one day this person calls from this huge company here in Ringgold. She says she’d like to do business with us. I was so excited. The conversation went well. Then she says asked if we could start Tuesday, so I said of course. So then she asks, “By the way, how many guards do you have?” and I immediately responded, “Oh, six or seven.” Then she pauses for a couple of seconds and says, “OK, well, let me get some things together and I’ll get back to you.” Sure enough, when I said how few employees we had she decided I didn’t have a big enough company to give them good service. I had tons of applications. I could have hired all the people she needed on the spot. But, unfortunately, I’m an honest person.

Q: I’m new to management and the person in charge of my team before was very lax. One of my coworkers goofs off on the computer more than she should. I’m also having a hard time getting the group to agree on a fair standard to measure productivity, which means they’re now even less productive. Where do I start? — Cleopatra

A: I hate to sound harsh, but I wouldn’t put up with that crap at all. Although, there’s tons of crap I do put up with. But the people I work with are very lovely people. And when I need them to do something, they try their best to get it done. If your team is not getting things done then that shows that they don’t care. Look, you’re the manager. You’re the boss. When you talk about standards, you’re the one who needs to set those. If they don’t like them there are plenty of other people out there who don’t have jobs and would love to work hard for you. People not doing their jobs is just bulls—.

Need some workplace advice from Joan? Tweet #SmallTownSecurity. She may answer in the next column.