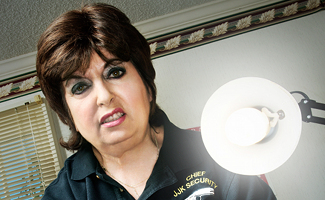 Q: You’ve wanted to be famous your whole life. Is it everything you hoped it would be?

A: I’m somebody that’s extremely conceited, and I’m a showoff and everything, but for some reason I don’t feel like a big star… That’s the good part of me. I don’t show off with that.

Q: What’s it been like watching yourself on Small Town Security?

A: It doesn’t register. I don’t say, Oh my God, it’s you, Joan. I swear to God it’s like seeing a stranger. I must be a weirdo, really.

Q: Has reaction to the show affected the behavior in the office at all? Like, did you all ever think to yourselves that you should tone it down?

A: Most of Season 1, I said that to myself, but then I thought I must be a stupid ass because if it wasn’t for that, then the show wouldn’t be watched by so many people. I didn’t like when I peed in my pants, but I thought, well, you know, that’s something that everybody was laughing at, so it’s okay.

Q: How has Dennis becoming more of a man changed your relationship with him?

A: [Laughs] I am not interested sexually in Dennis. And I’m getting a dirty look now because Dennis stepped in here. I’m just not interested in him in that way… I love him as an individual and almost a member of my family, but as far as anything else? No. Yuck.

Q: What if he somehow magically turned into a man tomorrow?

Q: You’ve said before that you have a sexual aura. Do you attract people everywhere you go?

A: Yes, as a matter of fact, someone very successful was in here a few days ago… She was this powerful woman in town who was telling me, you know, that even she’s attracted to me… I don’t know what it is, but I’ve been told this for years that I do have a sexual aura.

Q: You can be really hard on people but then you also have a soft side. Which one is the real Joan?

A: The real Joan is the combination. I don’t like bad people. I don’t like people that are criminals…. I think, without sounding stupid, if everybody in the world was like me, then this would be a good world.

Q: You have a materialistic streak. Besides cars, what else do you splurge on?

A: The only thing that I’m interested in is vehicles. I’m driving around in a brand new Mercedes sports car convertible hard top, which I’ve had about seven months. I’ve got a Camaro… I can’t get in that car without going crazy… I love that car. Oh my God. And I would like to buy myself new clothes, but since I’m so fat that would be a waste of money.

Q: If you were stranded on a desert island, would you take Irwin, Lt. Croft, Lambchop, or your new convertible with you?

A: I would probably take Lambchop. I know that sounds terrible, but Lambchop is 14 and a half years old and she acts like she’s 14 months old, and I don’t think I could love her anymore if I gave birth to her. She is my ultimate baby.

Click here to read a fan chat with Joan Koplan for Season 1.