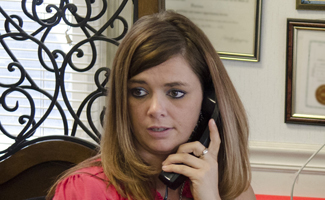 Christa Stephens is the outspoken office secretary and aspiring private investigator on AMC’s Small Town Security. In an interview with AMCtv.com, she talks about her P.I. training, pulling pranks on her office mates, and why Lambchop likes to hump so much.

Q: What’s the best part of working at JJK?

A: I just can’t imagine being able to work anywhere else that has a work environment like ours. Yeah, it gets crazy. But the atmosphere is just happy. We’re always laughing.

Q: Which fellow JJK employee gets the biggest laughs in the office?

A: Most definitely Chief. She’s a gigglebox. Me and her go back and forth all day. It’s constant. Then, Lt. Croft, he doesn’t get up until 1pm because he works the night shift. But after he does, he’ll join in with us. Brian’s right there as well, but he’s real quiet. He’ll chime in if there’s some kind of debate or something. And then here comes Captain, with mail in his hands — he’s always got some damn mail in his hands. He’ll come walking out of his office, “What’s happening? What are y’all talking about?” It’s just constant.

Q: Lambchop jumps in there as well. There’s a lot of leg humping near your desk. How do you deal with that?

A: I just laugh. It’s hysterical. If I had a dog humping my foot like that I’d just kick it off me.

Q: Has Lambchop ever attempted to have her way with your leg?

A Oh, hell no! I know this is going to sound crazy, but the dog humps Joan’s leg to thank her. The dog knows what “sex” means and what “penis” means. I swear she does! When Joan says those words, the dog barks and then starts humping, which makes Joan laugh. She does it just to make her master happy. They think she’s doing it to get an orgasm, and I’m like, “No way!” Lambchop has been fixed. The dog’s fixed! What’s also funny is she only uses one particular leg. She never attempts to use Joan’s other leg. And she has a favorite pair of shoes — a pair of tennis shoes she likes. It’s weird.

Q: Why do you want to be a private investigator?

A: My stepdad is a detective and works for the police department. So I grew up around it. I don’t know if that’s where the interest comes from. Maybe it’s just because I’m nosy. I would love to get a good case where the husband is cheating on the wife or the wife is cheating on the husband, then catch their asses, ’cause that’s something that I just don’t believe in. I mean, why cheat? You don’t want to be with someone, then don’t be with them. I love catching people doing something bad.

Q: Were you surprised when Joan okayed your becoming a P.I. apprentice?

A: No. Nuh-uh. Joan and I have known each other since I was 16. Chief and I also connect on the police thing, with her running for Sheriff, and knowing my stepdad. So I know that, deep down, she had faith in me. I was just really thankful that she gave me the opportunity and all. That meant a lot to me.

Q: Brian took you on a training exercise to follow a suspect in the mall. How do you think you did?

A: I think I done good, dammit! [Laughs] Because she didn’t spot me. It was tough, being in the mall with all those people. Plus, with the cameras! And she knew she was being followed. I had a lot stacked against me for my very first training. So I thought I did great, considering. Brian did too, and he tells it like it is. So coming from him, I took that as a real compliment.

Q: Was it your idea to pull the prank on Neil and get him to think he went to the bathroom on the chair?

A: Yep. That was all me. Because he said that I had a big ass! He said that when I walked, my butt cheeks [pause]… well, however the hell he described it. I don’t know, he never makes any sense. But him thinking he wet himself — oh, that was funny as sh*t. I loved it!

A: Oh, yeah. I’m all about it. Right now, I’m on a mission to get Brian. Just because he’s always like, “No one can get one on me.” I’ve tried, but he’s caught me. But just you wait, I’m gonna get him one of these days. Mmm-hmm… and it’s gonna be real good.