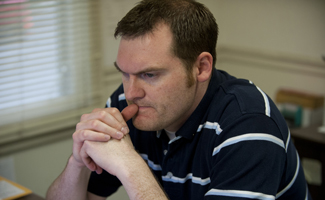 Brian Taylor is the always-smiling private investigator and office manager at JJK Security and Investigations. In an interview with AMCtv.com, he talks about the strangest case he’s ever worked on and who gives him the hardest time at the office.

Q: How did you come to work for JJK?

A: I moved to Ringgold, Georgia to take P.I. courses and was working at this grocery store. Chief would come into the store at, like, two o’clock in the morning and just buy a ton of groceries. It was so bizarre. “Who is this woman buying all this stuff in the middle of the night?” I guess it was after patrol, but I didn’t know her from Adam’s housecat. One of the guys I worked with said she was pretty well-known in town — she had run for sheriff and had a security guard business. He knew I was doing P.I. courses, so he said I ought to ask her about a job. So I did one day, and she said, “Well, why don’t you come and put an application in, because I’m looking for a part-time P.I.”

Q: What do you like most about working there?

A: When I started, I just felt comfortable immediately. Everybody is so loveable. Captain is such a likable guy. So’s Chief. Getting to know Lieutenant Croft — he’s odd and militaristic, but he’s serious about making sure the company works well and operates properly. Yes, we all cut up a bit, but we take care of business. It’s just a fun place to work. I never have to look at the clock and see when I’m going to get to go home. Every day is different, there’s never a dull moment.

Q: What’s the strangest case you’ve ever worked on?

A: There are some crazy people out there that want P.I. work done, but most of it isn’t even legal, what they’re asking you to do. I’ll never forget — well, we never actually took the case — but we had a three-hour meeting with this woman. She drove up from somewhere in southern Georgia and said it was important, so there Captain and I are in the office on a Saturday. She’s going on and on and on about this guy. She had this whole convoluted, cryptic story. After two hours of talking to her, I still didn’t know what she wanted us to do. Turns out the guy is some actor from this TV show in the ’60s, and in the end, I think she just wanted us to knock on the door of this house in Atlanta to see if he lived there. That was one of my first introductions to P.I. work.

Q: In Episode 4, you teach Christa how to trail a suspect. Who taught you?

A: Claude Nix. He was a certified P.I. instructor for the state of Georgia and taught at Northwestern Technical Institute. He had us each follow a classmate. We all got into our vehicles, and we could go wherever we wanted and do whatever. Then we had to come back and report. The guy I was tailing drove really fast, all the way into Chattanooga, onto some back roads. It was tough keeping up with him, but I did. When we came back to report, he said he was shocked that he hadn’t lost me. [Laughs]

A: When the team went to the shooting range, Lt. Croft was the best shot. Is that usually the case?

A: I think Lt. Croft is usually high up there. We’re all good shots, though. If I remember correctly, that day I was shooting much farther back than everyone else. My target was a good five or ten feet further out. So I’d say I did pretty good, considering the distance. Also, I had a snub-nosed pistol, which is not that accurate. The longer the barrel, the more accuracy you get. I don’t get to shoot that often — a couple of times a year, just enough to stay qualified in the state of Georgia. But I’ve always been good at hitting a target, since I was a kid.

Q: For the most part you seem to successfully stay above the fray in the office. How do you manage that?

A: I guess, I’m the most normal person there. [Laughs] It does get a little wild sometimes. I’ll be in the middle of something important, or have an important phone call, and there’s some loud shenanigans going on. Other than that, it’s pretty fun just to sit back and watch. Somebody usually wants me to take sides if there’s an argument because I’m normally not the one involved. Sometimes Chief will ask me who’s right and who’s wrong. She’ll get mad when I take the Lieutenant’s side. That aggravates her. It’s always fun to be the mediator.

Q: Which fellow JJK employee busts your chops the most?

A: Christa tries to. I think because I give her such hell about her Southern slang. Her grammar. Her horrible spelling. So she tries to get back at me. She tries to prank me. One time she tried to tape my office chair to the floor. She tried to tape the toilet lid down. She helped my girlfriend plastic wrap my entire car.

Q: Wow, plastic-wrapping your car is hardcore. What did you do to deserve that?

A: I think I pranked my girlfriend one day — I can’t remember what it was, but it was good. And she said she’d get me back. I’ve told her, and told Christa as well, that they’d have to get up pretty early in the morning to prank me. It was mainly my girlfriend’s idea, but Christa was all about helping. That was a pretty good one, I’ll admit.

Q: If JJK were a family, what member of the family are you?

A: Well, when there’s a debate, I’m the one people go to, to solve the problem. The one with all the answers… So I guess I’d be the cool uncle everybody wants to hang out with. [Laughs]