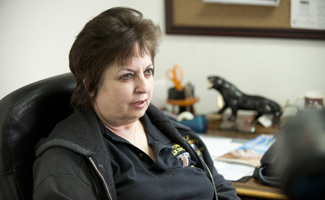 This week, the Associated Press calls Small Town Security‘s series premiere “jaw-dropping” and “heart-tugging.” Plus, numerous publications name the premiere as one of their top TV picks of the week, and Joan Koplan discusses the show. Read on for more:

• The Associated Press calls Small Town Security‘s series premiere “jaw-dropping” and “heart-tugging” and says the show “bristles with authenticity even as it feels deliriously (and sometimes hilariously) hyper-real.”

• The Kansas City Star, Access Atlanta and The Modesto Bee all list Small Town Security‘s series premiere among their top TV picks for the week.

• Media Life applauds Small Town Security‘s main characters for being “real characters whose eccentricities are revealed at a natural pace” — and teases an “astonishing twist” at the end of the first episode.

• The Catoosa County (Ga.) News talks with Joan Koplan, who says of the show, “I just still can’t believe it.”

• The Atlanta Journal Constitution talks with the cast, including Koplan, who believes Small Town Security is “going to be a hit.”

• In honor of Small Town Security‘s premiere, Awkward Family Photos posts photos celebrating “all of those warm, tender, and joyful moments we share with our co-workers.”