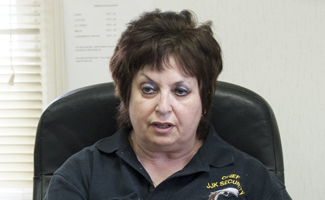 Joan Koplan from AMC’s new original series Small Town Security spoke with AMCtv.com about the crazy things that go on at JJK Security and why her employees love her so much.

Q: How did JJK Security and Investigations end up on AMC?

A: I’ve had people coming into my office for a long time saying how crazy it is and how it should be a reality show. I knew Matt Saul from William Morris Endeavor [talent agency], so I called him and asked if he’d be interested in doing something. He said we’d have to make a DVD, so I did that. After he saw it he said, “Yeah, I see what you mean, that’s a crazy place.” About four days later, he calls and tells me that Ken Druckerman from Left/Right productions in New York City is interested in it. I almost crapped my pants.

Q: What brought you to Ringgold, Georgia?

Q: What’s your favorite part of your job?

A: Patrolling. I don’t patrol as much as I used to because I’ve got five people out there patrolling. But I love going out a lot of times by myself. I’m out there for like two or three hours, patrolling our places, mostly car lots, trying to catch somebody doing something. That’s in my blood.

Q: Why do you think you inspire such loyalty among your employees?

A: It’s hard for me to answer that. I mean, I’m a very good person, and I’d do anything for them and they know that. But I act so crazy. That’s why I never had a partner. I wouldn’t have a business where somebody else is telling me what to do because they disagree with me. So they know it’s totally my company, so they respect me for it. The main three people I yell at are Irwin, Christa, and Lieutenant Croft. I don’t really yell at Brian that much, because he doesn’t really do anything to make me mad. Just this morning, there was a bunch of yelling [Lambchop starts barking]. Shhh… [to Croft]. Could you take her out of here, please? And give her something to eat. And shut the door, so I can talk, please! No, this door. Jesus! Oh, brother. Sorry…

Q: No worries. I was going to ask about how Lambchop is as watchdog. I guess she was sensing her cue….

A: Yeah. She just turned 14 and she acts like she’s 14 months old. She’s just like her mother. She’s a great watchdog. She can sniff out anything.

Q: Who’s the funniest person in the office?

A: I’d say I am. I say crazy things. Our neighbors next door love me. A lot of times when I hear the train come by, I open the door and yell, “Stop the train and let my brother Jack off!” I do crazy things. There’s a lot of farting in the office.

Q: Who’s the biggest culprit of that?

A: All of a sudden, Lieutenant Croft is the big farter, really. His farts have gone from trumpet to trombone.

Q: What was the reaction from your talk show audience to Lieutenant Croft’s secret?

A: Keep in mind, this is the Bible Belt. Some people — well, nobody was rude, I will tell you that. But some people felt very sorry for him. But there was a lot of understanding. I got very few calls that were derogatory.

Q: Is there anything that goes on at JJK that you really wish fans could see but isn’t filmed?

A: Well, I don’t know if the crew caught any of it, but I’ll be honest with you. I’m happily married and I love my husband, but I do have a crush on Brian. I flirt with him and he flirts with me. Like this morning, when he gave me my oatmeal, he said, “Is it thick enough for you?” and I said “Oh, yeah, you know I like it thick, Brian.” And he said, “Oh, I know you do.” It’s a lot of sexual innuendo.