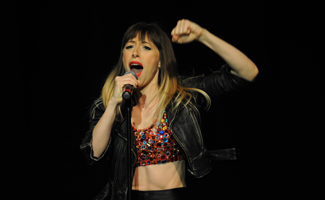 In Episode 6 of AMC’s Showville, the people of Fairfield, Iowa chose Adrien Daller as the winning act. In this interview, the pop singer discusses competing against a former boss and what she learned from talent coaches Alec and Lisette.

Q: Alec called you the Lady Gaga of Fairfield? How true is that?

A: I wouldn’t compare myself to Lady Gaga because I think she’s incomparable. What I really like best about her is that she’s experimental with her costumes and the visual presentation of her work… Now that is something I would love to emulate, but hopefully in my own unique way.

Q: What would you say is the most unique thing about you as a performer?

A: I have a different look, I’m a little older than a lot of up and comers. And I want to use all that, I don’t want to fight against it. I want to use my strengths to be different from everyone else. I may make pop music, but I want it to have more of a punk aesthetic, with a lot of attitude behind it.

Q: What was the best thing you learned from Lisette?

A: Definitely staging. She watched me perform the song and worked with what I was already doing. She didn’t over-choreograph my song, but she gave me some useful pointers to getting people engaged while they’re watching… I move around when I sing, but she gave me a good structure and reminded me that it’s good to have that structure, so you’re not just walking around aimlessly.

Q: What about Alec?

A: He really pushed me to talk about why I wrote the song and who the song was about. I wasn’t comfortable about giving all the information. [Laughs] But what was good was that he reminded me of the importance to connect with the song personally and tell the story in my performance. Once I’ve written something, it’s out there. So it’s easy to forget why I wrote it and what it means to me. Alec reminded me to put the acting part back in. Then people can relate to it and feel the emotion behind it. It’s not just pretty words.

Q: What is your favorite thing about Fairfield?

A: It’s how collaborative artists are here. It’s a small, but very vibrant artistic community. When you are somewhere where there is a smaller scene, you kind of have to collaborate with each other. There aren’t other options of ways to accomplish things. If you’re in a bigger city, there’s already a scene. But here in Fairfield you have to build it from the ground up. It’s like this huge team effort. I love working with people and collaborating, whether it’s being in a band or in musical theater.

Q: So who do you think your toughest competition was?

A: I think Mr. Tap Dancing Acrobat [Isaac Stauffer] was remarkable. He was so skilled… What I had in my favor was that all my friends came out. I have a local fan base who has been rooting for me for years to do something like this. So they were awesome. Also, I have to say that I think Jeffrey Hedquist (singer/songwriter) is amazingly talented. He has hired me to record radio commercials for his production company before. So I was actually going up against one of my bosses. [Laughs].

Q: What were most nervous about on show night?

A: I think I was less nervous about performing well, as I was about making sure that the coaches knew that I had really cared about what they had been teaching me… I guess I wanted to make them proud. Also, I was just making sure I didn’t do anything catastrophic, like fall off the stage or forget the words. It’s never the little things you worry about. It’s always these dramatic things that almost never happen. You always think, “Of course, this will be the night that happens.”

Q: Fairfield has been dubbed the transcendental meditation capital of the U.S. Do you meditate?

A: I do. It’s a part of my daily routine and has been for a very long time… I also work for the David Lynch Foundation… a non-profit organization that brings transcendental meditation to high-stress populations, like veterans with post-traumatic stress, women dealing with domestic abuse… The town attracts a lot of people who are interested in those things, living a healthy lifestyle. So I’d say that’s really what the community is: It’s a great place filled with a lot of bright faces.

Q: How has your life changed since winning the contest?

A: Well, it really taught me that you never know when an opportunity is going to come up, so you need to be ready when it does. Winning has inspired me to become more creative. I’m learning piano. I’m learning guitar. I’ve got a solo EP coming out. So I guess the show made me go further with my music, to stay on top of my game and to be ready for anything.