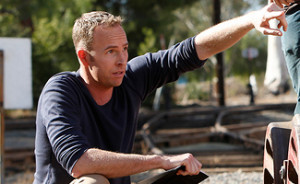 In this interview, Marcus Hunt (co-host of AMC’s Owner’s Manual) talks about his co-host Ed Sanders and dancing the Macarena dressed as a polar bear in a Taiwan zoo.

Q: How did you get involved with Owner’s Manual? What was your reaction when you heard about the concept of the show?

A: I got a call for an audition for the show. Ed Sanders had already been cast for it, so I was being put up against Ed… I gave him the right amount of crap, so I got a call that said congratulations, you’re the guy! I’ve always been an extreme sports guy — I sky dive, I rock climb, I scuba dive — and ever since I was a little boy, I’ve dreamt about hosting a show that’s adventure-based like this.

Q: The show seems like every little boy’s fantasy come to life…

Q: When did you first know that you were a by-the-books kind of guy?

A: I’ve always been “that geek.” I like to try to get my stuff down. Like if I’m going to tackle a machine, I like to know everything I can about the machine before I try and deal with it.

Q: You and Ed go head-to-head over your philosophies for operating machinery. Is there a situation you can imagine where it would be better to trust your gut?

A: I have to be honest, going into it I thought that the by-the-books way was going to beat out the non-by-the-books way ten-to-one, but the truth is that Ed is a really smart guy when it comes to machines… Like when it came to running pay-loaders and diggers, he’d done that his whole life, and he didn’t need the manual. And he could almost figure it out almost quicker than I could research it.

Q: So it’s not always instinct versus book-smarts…

A: A lot of these machines are massively complex. It’s not like you can get into a stunt plane and push a button and start hitting things. He’s not an idiot going in there banging around… Luckily neither one of us has an ego. We want to be right, but at the end of the day, we can appreciate each other’s opinion and respect it. And if he has a better idea, I’ll listen. And if it’s better, I’ll do it.

Q: To what degree does teamwork help the two of you get through challenges?

A: At the end of the day, it’s 100%. It’s absolutely necessary. Most every challenge that we have to do absolutely relies on us working together. Like it takes ten people to raise the sails on a tall-ship, and it takes two people — one down in the brush and one in the yarder — to bring those logs up the hill… And we’re also under a time crunch during all of it.

Q: Is it as scary to perform the stunts as it looks? What was the scariest moment while shooting this show?

A: I’m a weirdo. I like that stuff. Like the stunt plane gives me a thrill… I would be lying if I said I wasn’t nervous during operating every one of the major machines, but that kind of fuels me… You’re working with millions of dollars of machinery, and my fear didn’t come from failing the competition, my fear came from that I could possibly ruin this $500,000 piece of machinery.

Q: You have two patents pending on inventions. Can you tell us anything about them?

A: One is for bartenders. It’s a stainless steel draining system that allows you to use the overflow valve… That allows the bartender to just pour the used contents into the strainer and strains the liquids down the drain and then just allows you to just dump the solids into the trash can… The other one is for deep-sea fishing. They have what they call a “fighting belt,” which is this big fat belt on your waist that disperses the weight of the fishing rod along your midsection… I designed an everyman version of that.

Q: You are a man of many talents…

A: Yeah, I also have the crazy character suits that I do as well… I’ll get a call that’ll be like, “Can you go to Taiwan as a polar bear?” And just two days ago, I did a photo shoot as a Yeti and a grizzly bear, and this weekend I’m going to be an elephant… You have to be able to find your happy place inside these things. You have mechanics around your head, you have a helmet that you can’t just pull off. It sounds silly but you have to have a positive attitude. Like I danced the Macarena in a Taiwan zoo in 110-degrees in a bear suit.

Q: You were also a host on Hammer Heads, which involved doing substantial construction projects in short amounts of time. Has that experience helped you on Owner’s Manual?

Q: What was the biggest surprise you learned while shooting this show?

A: One of the bigger things is just that people are out there doing things that you would never think people are doing… Like we went to Oregon and it was 21-degrees and it was freezing and nasty… We blast in there in two days, but every single morning these people are up at 6AM and go into those conditions. So you gain a massive respect for the experts we dealt with. They are all awesome.

Q: Do you have a favorite owner’s manual?

A: There’s nothing that you can’t look up today almost in a minute on the Internet. I’m that geek that the second that I don’t know how to do something, I’ve got my phone out and I’m looking up how to do it. I’m a geek for knowledge and whatever it is, I will look it up instantly.