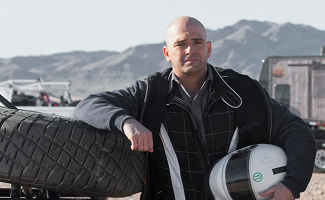 When you think of Las Vegas, you think showgirls, gambling and late nights! One thing you might not think of are 300 horsepower dune buggies that can eat up the Nevada desert quicker than my old mate Marcus can clear his plate at a casino buffet — and believe me he can. I’ve seen him!

That was this week’s challenge… No, not watching my slender buddy stuff his face at a Vegas buffet, but dune buggy racing with the amazing team over at Zero One Odyssey Racing. I honestly thought that this was one challenge me old mate could handle without having to read a manual. But no!!! He honestly wants to take a manual in the car with him. How the bloody hell are you supposed to race a car across the desert with an owner’s manual stuffed in your face? I know there’s a law against driving while holding a cell phone, but is there a law that prohibits a dune buggy driver from reading a manual while doing 70 mph? My goal is to stay in front of old sweet-cheeks, especially when he’s reading his manual!

Now, these guys at Zero One have some of the most powerful cars (or buggies, or whatever you call them) that I’ve ever seen. These buggies are built to literally eat up whatever you can throw at them, and we were planning on serving them up a large helping of Nevada desert with a side helping of holy s***!

These cars were absolutely awesome. They had 18 inches of wheel travel with 33 inch tires, which allows these machines to speed across bumps and uneven terrain at speeds of over 70 mph. Yes, you heard me: 70 mph. The main guy at Zero One Odyssey Racing, Earl, told Marcus and me that you have to drive these cars fast or you’ll be bumping all over the place. Basically, the faster you go, the better these cars handle — it sounds crazy but it’s true. However, you have to respect the car and the desert or you’ll end up with either one of them handing you your backside!

The team at Zero One consisted of Earl, Melissa and Kevin. Earl told us that our main challenge was to make it through a 12 check-pointed 25 mile course, and for me and Marcus to be victorious we’d have to finish ahead of Melissa. Now, this would be easy if Melissa wasn’t an off-road race-driving expert. The only saving grace Marcus and me had was the fact that Melissa couldn’t drive faster than 50 mph, which was the average speed that the guys at Zero One expected us to maintain. If we could average faster than 50 mph, we could effectively beat Melissa. However, that is easier said than done, especially when there are literally thousands of tracks out on the course.

We would have the help of a GPS device in the car — except this GPS wasn’t like the ones in your everyday cars. They don’t exactly plot a nice direct route for you from point A to point B. They really just show you where you’ve been. It’s up to you to find the 12 cones and your way through the course. But, as per usual, before Earl would let us start our race we would have to show him that we could indeed handle these cars by competing in a quick one mile course. We could only race Melissa once we had completed that course.

Now, Marcus and me always like to have a little side bet, and this was no different, especially because whoever is behind the lead car is usually the one who eats all the dust churned up by the car in front. This is something that I was not looking forward to, so I’d have to finish first!

We did complete the first challenge, which ended in quite a spectacular way! The 25 mile course was a different beast, and one that really did kick Marcus and my butts. But what amazing, crazy fun it was! One of the most amazing challenges ever! Enjoy!!