Mattea Conforti, who plays Millie Manx on AMC’s NOS4A2, chatted with AMC.com about how Millie’s compelling choice between family and freedom plays out this season, what it’s like working with Zachary Quinto, and more.

Q: Millie gets fleshed out and more complex in Season 2. How did you work with the creative team to chart Millie’s arc this season and expand her character?

A: Even during Season 1, when I just was getting to know Millie Manx as a character, I always knew she had so much more potential than what the audience saw last season. The audience really knew her for her scary side and as a gory Millie. This season, the creative team and I had to really work on upping the ante when it comes to Millie’s personality by making her more of an intense character that can tap into her other emotions. She’s just grown so much since last season, and it’s interesting to see how she can just grow up in Christmasland too.

Q: What’s the process for you to get into character, both physically and mentally? How do you get into the mindset of someone who is basically a demon? What’s the makeup and costume process like?

A: Getting into Millie Manx physically, they have to airbrush a lot of veins onto me, and there’s a lot of gory makeup involved. I have to wear this really scary wig with bangs, and that iconic general’s costume all the time. Mentally, it’s not really that hard to get into Millie’s mindset because she has the same emotions as any other human… except it’s more intense for her and she has more life-threatening decisions to make.

Q: How did you work with Zachary Quinto to create the dynamic of Millie and Charlie’s father-daughter bond? How did you approach that splintering bond as Millie starts to grow in her independence from him and Christmasland, especially in Episode 9?

A: Zach and I get along really well off and on the set, so it wasn’t much of a challenge to create that father-daughter dynamic between us. But things get more complicated later in the season when Millie starts to get curious about life beyond Christmasland. I do feel like Millie will always love her father no matter what. Her father will always have a special place in her heart — but it’s just the fact that she’s maturing and she’s getting more curious about the real world. She’s willing to leave her father for that.

Q: In Episode 9, a lot of your important talks with Zach happen in the ice maze, which seems sort of metaphorical for Millie’s current state of feeling trapped in eternal childhood. Was there any discussion about why these scenes took place where they did?

A: From my recollection, I don’t remember specific talks about that, but I think it’s interesting that it’s a different place in Christmasland. Usually the Christmasland scenes have been in Gingerbread Village, or by the gates of Christmasland, or when you first walk in. I feel like as Millie learns new stuff about her life and her past, she’s also talks to her father about new places we haven’t seen before. Everything is just so new for her, and the audience is also experiencing that newness.

Q: How do you think Millie feels in Episode 7, when she realizes she’s been talking to her mother this whole time? Does she really remember her mom?

A: I think when she’s first talking to her mother, it’s all subconscious there. At first, she’s scared — she’s like, “Who is this person? Why is she talking to me? Why does she know my name?” But part of her remembers her, and she realizes that she knows who this person is, but she can’t put a finger on it. But I feel like when she meets her past self, that’s when she realizes who she’s been talking to. When she’s like, “That girl is me and you’re my mother, and this is who I used to be, and who I miss being.”

Q: Also in Episode 7, there’s a scene where Millie is playing with her non-demon self. What was shooting that sequence like?
A: It was really fun. It’s definitely a whole different process than what the audience sees on TV, because you have to have someone else play you, as either your demon self or your normal self — it’s not like you can play off yourself. But it definitely looks really cool onscreen!

Q: In Episode 8, Millie asks Vic [Ashleigh Cummings] to help get her out of Christmasland. What do you think she’s feeling, asking her and her father’s nemesis for help?

A: For Millie, it shows maturity that she’s able to go to Vic instead of her father. She knows the answer she’s going to get to get from her father; he’s going to say, “Oh, don’t worry, it’s all gonna be okay,” but she knows now it’s not going to be okay. I think she’s a little scared to ask Vic, because she knows what she’s gonna do to her father, but she also knows that it’s necessary for her and the kids in Christmasland. 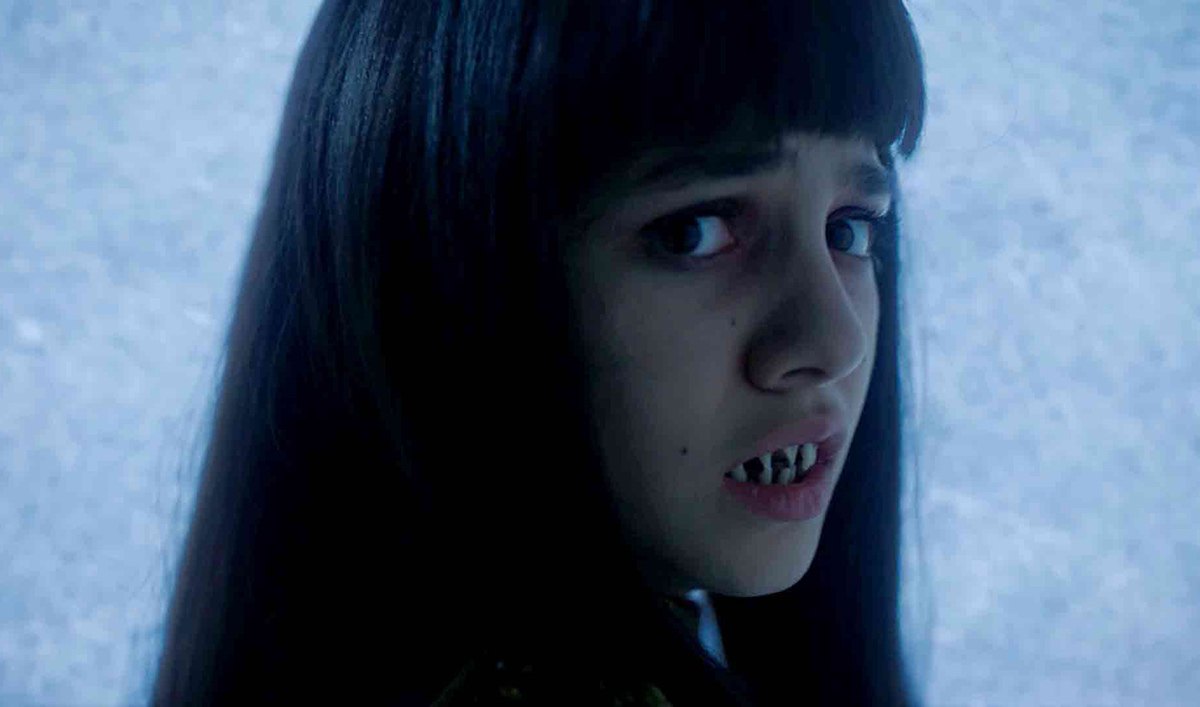 Q: In Episode 9, Millie takes the leap and leaves Christmasland. How do you think she’s feeling?

A: I think, at first, she might be a little relieved. At least, I played it like she might be a little relieved that she’s not in Christmasland when it was all falling apart. But she also definitely misses Christmasland and her father, because that’s the only thing she’s known and loved. She’s literally watching her whole world crumble away. She’s in the unknown now, and now she has to make a life for herself—she’s never really had the opportunity to do that.

Q: This is also the first time she’s been in the sun in like a century.

A: Yeah, I think she’s definitely a little happy about that.

Q: Just for fun, have you given any thought to what your power would be, if you were a strong creative in real life? What would your knife and inscape look like?

A: I like to skateboard a lot, so I think my knife would be my skateboard. I think my inscape would probably be the beach. I love to be there, it’s so calming because you can just lay in the sun all day.

Click here to watch the latest episode of NOS4A2, available now on amc.com and the AMC app for mobile and devices. Check out the on-air schedule here for more encore viewings and upcoming episodes of NOS4A2 on AMC.

Watch a sneak peek of Sunday’s all-new episode here, in which Charlie Manx desperately tries to flee Christmasland as it crumbles around him.

For more of a behind-the-scenes perspective with the NOS4A2 cast and creators, check out this library of interviews with the team in front of and behind the camera: Ólafur Darri Ólafsson discusses Bing’s crisis of conscience. Virginia Kull explores Linda’s attempts to bridge the gap between her and Vic. Ashley Romans talks Tabitha’s struggles to fight the supernatural. Jonathan Langdon opens up about how fatherhood shaped his role. Zachary Quinto talks peeling back the layers of Charlie Manx. Ashleigh Cummings explains why Vic is stuck in a cycle of trauma.

The NOS4A2 Season 2 Finale airs Sunday at 10/9c on AMC and BBC America. For the latest news, sneak peeks, Q&As, videos exclusives, and more, sign up for the NOS4A2 Insiders Club.