Books are a prime source of material for new television shows. From Killing Eve and Handmaid’s Tale to Big Little Lies, some of the biggest shows on TV right now were born from books. Not only is the string of hit adaptations endless, but it’s also not a new trend. Hits like True Blood, Sex in the City, Outlander, and Boardwalk Empire are just a few that paved the way for your favorite books to make it to your TV screens.

And for book lovers, it’s exciting to watch and see just how close the television adaptation translates to what took shape in your mind as you read about the dynamics between characters and of course, their journey through the story from beginning to end.

“Will it be the full story packed into one season?”

“Will the characters look the way I imagined them?”

“Will the visual effects make me feel the way the details from the page did?

In the case of Joe Hill’s nearly 700-page horror novel, NOS4A2 — with its rich backstories, immortal characters, and children being kept away in a terrifying place called “Christmasland” — there was no shortage of decisions for the show’s writers to make as they tried to honor the original story while keeping expectant TV viewers engaged.

We’re gearing up for the Season 2 premiere of NOS4A2 this Sunday by looking back at the book-to-TV comparisons of note thus far.

WARNING: If you haven’t read the book or watched Season 1, there are spoilers ahead!

Bringing the Characters to Life

The casting of characters is typically the biggest concern for readers who are seeing a story they know from the page come to life on the screen. These are the people they have gotten to know, come to love — or, in the case of NOS4A2, hate.

The immortal character that is Charlie Manx (Zachary Quinto) is one of the most interesting translations of the series. Somehow Quinto manages to make the man feel like an even bigger monster than you might’ve imagined. Seeing him in the flesh and hearing him speak makes him feel like less of the fantastical, twisted, sing-song character from the book and more like a real man with really gruesome tendencies. As he gets younger, transitioning from grotesque to borderline handsome — a “byproduct” of him bringing the children to Christmasland and stealing their souls — we witness his horrific acts with our own eyes. It’s unsettling to say the least.

Vic McQueen (Ashleigh Cummings) is the character we spend the most time with, both in the book and the show, and she feels spot on. From her tomboy exterior, to her vulnerable-yet-tough interior, she is true to form. The TV show is able to add subtle context with small details that you might not have room for in the book. Consider how Vic and her mom crush the ice in their sodas in the same rhythm, not even realizing they’re a mirror image of one another — a soft nod to the deep connections between ourselves and our parents, no matter how much we wish it weren’t true.

Speaking of Vic’s parents, the rage between Linda (Virgina Kull) and Chris McQueen (Ebon Moss-Bachrach) will not come as a surprise to readers, but as individuals they come off much softer in the show. Vic’s dad isn’t quite as forceful in pushing her away, and seeing the tears in her mother’s eyes gives way to the complexity of this woman’s life that wasn’t always easy to get a sense of in the book.

Bing (Ólafur Darri Ólafsson), the janitor at Vic’s school (an addition made by the show) and Manx’s new hire, is as stupid and terrifying in the show as he is in the book. Like a giddy child, he is magnetized by Manx. And seamlessly, with a few pieces of duct tape and a gas mask, he becomes the lead man stealing children and killing their mothers on Manx’s behalf.

Then there’s Maggie Leigh (Jahkara Smith), a medium and fellow strong creative. She is the biggest departure from the book as far as characters go. While she sports the same purple hair and scrabble-piece earrings that read “F” “U,” it’s her demeanor that strays. In the book, Maggie reads as quirky and lost, whereas on screen she appears confident and mature. In the book she’d say things like, “Oh kittens, are you alright?” bringing a sense of humor that there doesn’t seem to be room for in the show, given her much larger role. 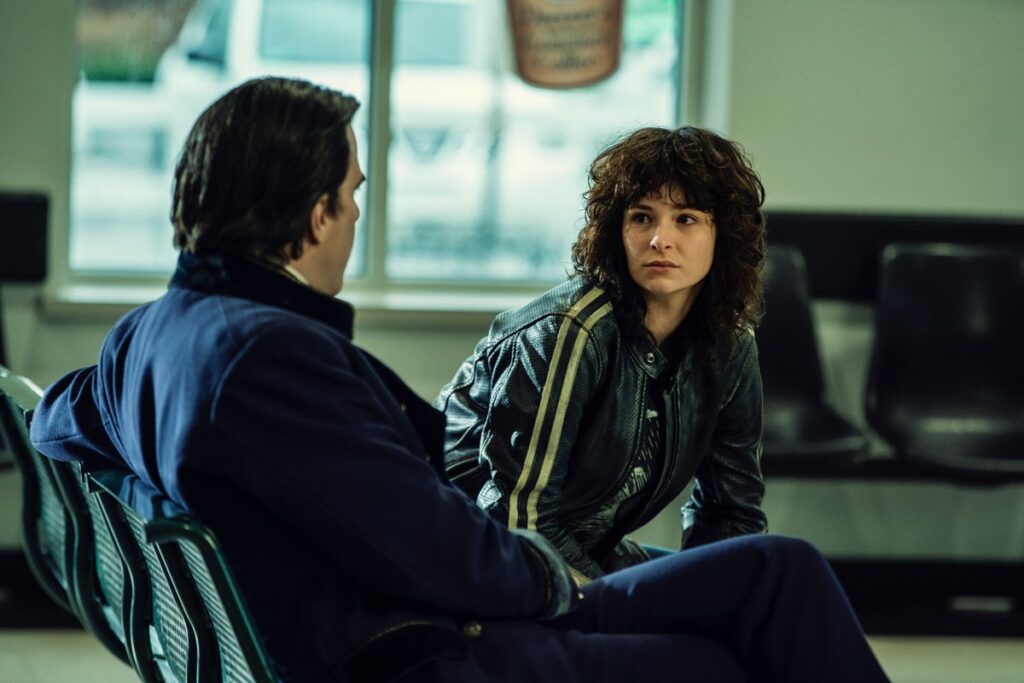 The underlying motivations for the characters are more-or-less the same between the book and the show. To oversimplify: Vic wants to end the evil reign of Charlie Manx and Manx wants to eliminate Vic McQueen, his biggest hurdle to filling “Christmasland” with stolen children. Yet the events that lead to how these two come to know one another vary greatly between the two mediums.

In fact, the very thing that finally forces Vic’s attention to Charlie Manx in the show doesn’t even happen in the book. That is the abduction of Haley, a young girl from Vic’s neighborhood that she babysat. In the book, Vic sees the evil of Charlie Manx under different circumstances when the Shorter Way bridge leads her to his house in the woods. There, she discovers The Wraith and a boy in the backseat with hooks for teeth. She nearly dies trying to save the boy, and that is only her first encounter with Manx.

In contrast, her first encounter with Manx in the TV show is a fairly civil exchange at a bus station — until he discovers she didn’t come alone and that Maggie followed her there. Readers of the book will also remember Maggie’s demise at the hands of The Wraith, but in the show she survives the encounter. 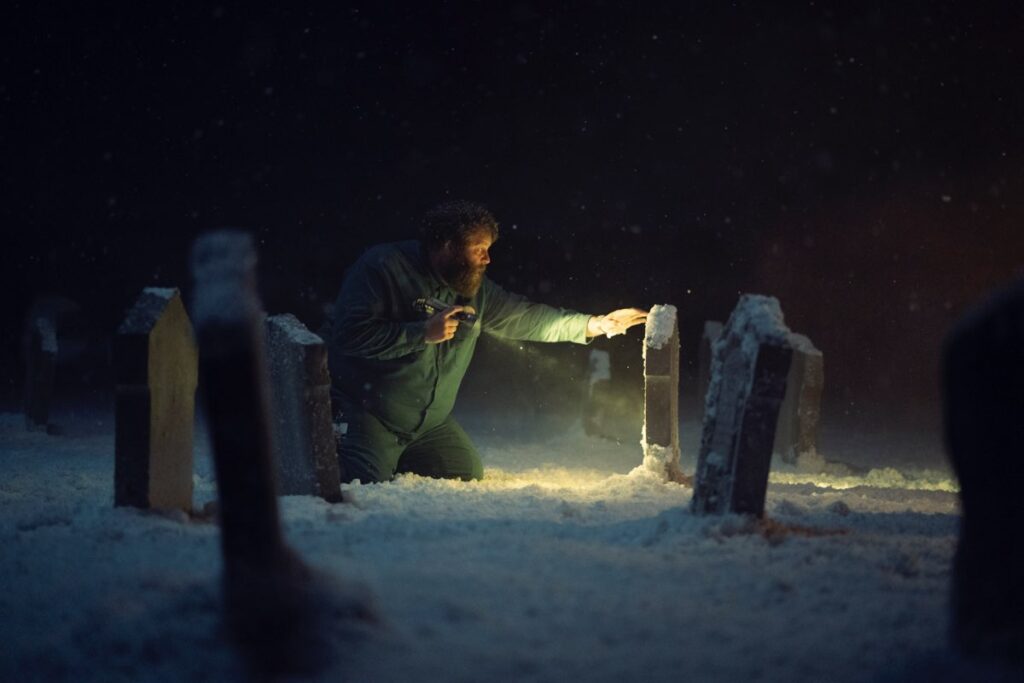 Immediately readers of the book will find familiarity in the illustrations at the start of each episode. A bag of blood, a gas mask, the mysterious bridge — they all serve as mysterious and haunting ornaments for the story in both the book and the show.

Then there’s “Christmasland” and the Shorter Way bridge, arguably the most visually rich environments from the book. The show remains close to the words on the page, although what may feel different is how these larger-than-life scenes came to life in your mind. Take for instance when Manx brings Bing to Christmasland for the first time, specifically to the graveyard where children are trapped under ice. Depending on your imagination, this could easily have been more chilling on paper.

On the other hand, there’s Vic’s bridge — the static flashing between the boards, the bats, and the unbearable noise. While we can imagine these things to be frightening and excruciating, it’s way more visceral when you actually see Vic absorbing the impact.

Go Behind-the-Scenes With the NOS4A2 Cast and Crew As They Bring the Show to Life: 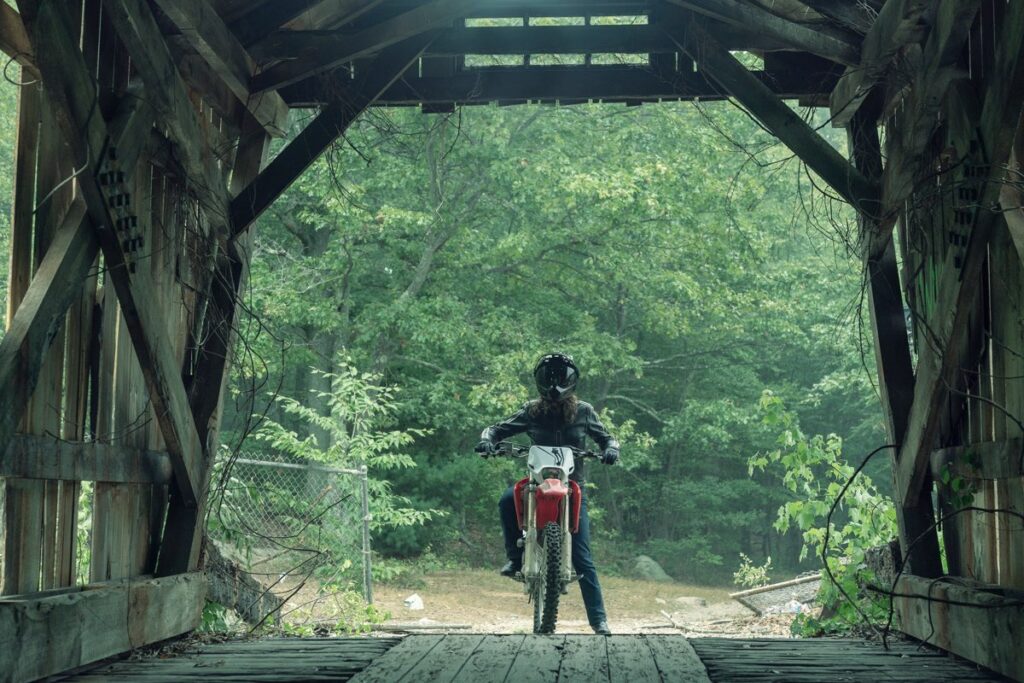 Readers of the book will notice this right away. In the book, we meet Vic as an 8-year-old girl and in the show we meet her as an 18-year-old young woman. Despite the aging up of our main character, we aren’t deprived of the critical moments in her story, like the first time she crosses the Shorter Way bridge. But the difference in her age when she goes through said experiences makes for subtle differences in how we may interpret them, and, of course, how she would naturally behave.

Take for instance that first crossing of the bridge. For much of the beginning of the book, she’s crossing it on a Raleigh bike, not a dirt bike. It’s not until later, after living with some distance from Manx and the Shorter Way bridge, that she finds a reason to cross again, and in turn, discovers that an old dirt bike she’s repairing will serve as her new “knife.” In the show, however, she already has her dirt bike when we first meet her, and it’s what she uses to cross the bridge for what viewers understand as the first time.

Given the 10 year age difference, it’s natural that her response to the bridge and eventual discovery of Manx would be strikingly different. So when she meets Maggie in the book at 13-years-old, after landing herself in Here, Iowa, it’s not surprising that she wants to know everything there is to know about Manx. She doesn’t yet have the life experience that tells her to stay away from something that is clearly all bad news. But 18-year-old Vic in the show does. And when Vic meets Maggie in Episode 1 she can’t get away from the library, or this strange girl, quickly enough.

It’s with these shifts that the writers have managed to transform the epic tale of Joe Hill’s NOS4A2 to your screens. If you haven’t already, catch up on Season 1 available now with AMC Premiere, and mark your calendars for the Season 2 premiere this Sunday 10/9c.