What would Mad Men be without advertising? Josh Weltman, Mad Men‘s ad consultant and Co-Producer, talks about the ad-making process, those memorable campaigns and how Mad Men has changed the ad industry.

Q: You have been Mad Men‘s ad consultant for all seven seasons and have worked in the ad industry for 25 years. How did you get involved with the show?

A: I met [Matthew Weiner] when he was working on The Sopranos… When he found out I worked in advertising, he gave me the pilot to read and I was amazed. It was spot-on. I began to talk about my experiences working in an advertising agency and why I felt that people who had tried to portray what advertising is about in movies and television never really quite got it.

Q: What was the biggest misconception portrayed on movies and TV before the show?

A: The process of coming up with an ad or a communication message was always portrayed on television as if, like, the genius creative would be visited by spirits in the last act and he’d come up with the thing right when it was needed. But in an agency, coming up with an ad is really the last two yards of a 100-yard march down the field. It starts with a business problem and red herrings and blind alleys and things that you don’t sell and focus groups. It’s much more a process of discovering why a particular group of people buy something than creating a trick to get somebody to buy what you’re selling.

A; Over the course of the first couple seasons, we realized that the ads were a great way to let people in on what was going on inside [the minds] of characters… There’s no better example than the [Kodak] Carousel pitch at the end of Season 1, which was designed to show us what Don is feeling about family and what he’s feeling about his marriage and what he’s feeling about his business and his hopes for himself and his brother’s suicide and loss, all in the same thing all under the auspices of coming up with a name for a plastic slide projector carriage. [Laughs]

Q: What’s the biggest difference between working in an ad agency today and the 1960s version portrayed in Mad Men?

A: The biggest difference is the relationship between the agency and the client. Building a brand was thought of as something that could take ten years or a generation. It wasn’t unheard of for account executives to be like the godfather to their client’s children. They were much more involved in each other’s lives.

Q: Who from Mad Men would be able cut it in today’s advertising world? 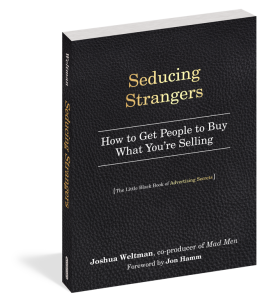 Q: Seducing Strangers is a titillating title for your book. What is the relationship between seduction and advertising?

A: Seduction is about listening to what people want to hear about themselves versus trying to shove what you’ve got to say and sell down their throats… It’s about understanding what people hope for, and then as soon as you realize, “Oh, this is what they want,” then the ads almost pop into your head.

Q: You talk about the importance of free time and staring into space to the creative process…

A: I think it was Don who said to Peggy about coming up with ideas, “Fill your head with everything you can and then go to the movies.” You can’t think about the abstract principles of a problem and the specifics of it at the same time, so you need that time when you’re doing something else for your head to twist around the shape of the principles. We all know that feeling when your thoughts click into something new and the specifics of the solution make themselves apparent. It’s like that moment when the light bulb comes on.

Q: Do you have a favorite ad from Mad Men?

A: The one that stands out for me personally is the Hilton Hotel pitch where Don has befriended Conrad Hilton and he’s sort of looking to him like a father figure. It’s personal. So Don goes out on a limb and does what I think is the agency’s first modern advertising campaign, which was, “How do you say ‘ice water’ in Italian?”… They’re very clean ads. They’re colorful, they’re modern… Then, in the scene, Don gets crushed. It’s not what Connie wants. It’s my favorite scene because, for you to get out of the scene what Matt was going for — which is Don completely crushed and devastated — everything had to be great about the ad. Don had to have had the goods… Mad Men is all about the emotional payoff.