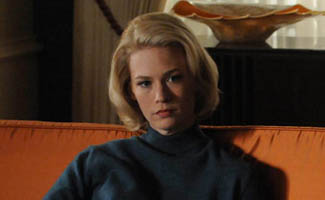 This week, Matthew Weiner is nominated for an outstanding producer award, while January Jones books a new TV role. Plus, The Washington Post is thankful for Teyonah Parris. Read on for more:

• Matthew Weiner is nominated for outstanding producer by the Caucus for Producers, Writers & Directors, according to The Hollywood Reporter.

• TVLine reports that January Jones has joined the cast of FOX’s The Last Man on Earth, a comedy featuring Will Forte.

• The Washington Post is thankful for Teyonah Parris, whose Mad Men performance “frequently makes what could be a token role about a token black secretary something more complicated.”

• RadioTimes is thankful for Mad Men, describing it as “still the smartest and most literary show out there.”

• Variety says that the U.S. rights to Bluebird, a movie starring John Slattery, have been acquired by Factory 25.

• According to Dread Central, Preservation, a movie starring Aaron Staton, will be released in both limited theaters and VOD outlets on Jan. 9.

• InStyle has the news that Janie Bryant has designed a wedding shoe, a pump style shoe with a blue bow on the heel.